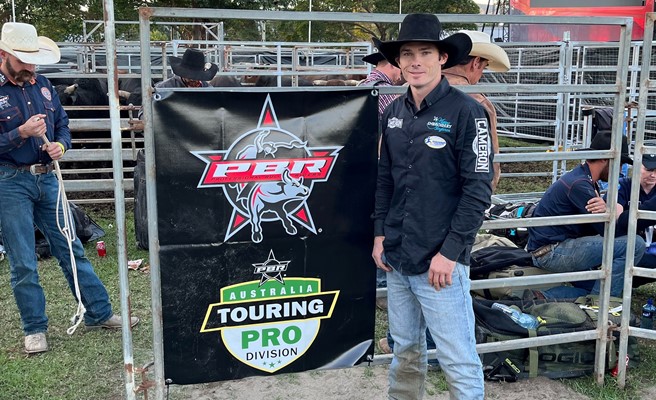 Cody Heffernan extended his lead atop the race to be crowned the 2022 PBR Australia Champion by winning the Touring Pro Division event in Berry, New South Wales.

While Heffernan began his campaign in less-than-ideal fashion, bucked off by Mac Daddy (Diamond S Bucking Bulls – Brian Scott) in a hard-fought 5.28 seconds in Round 1, his determination and resilience was on full display as the second round began.

Climbing aboard Cowboy Cartel G Force (Shultz Bucking Bulls), Heffernan reached the requisite 8 for 80.5 points to earn one of the eight coveted positions in the championship round.

Heffernan then readied to go head-to-head against Natural Hillbilly (Throsby & Russell & JC Cattle Co.) in the final round. Matching the powerful animal athlete jump-for-jump, Heffernan reached the requisite 8 for 85.5 points, winning the round and clinching the event victory.

Compliments of the golden finish, Heffernan netted 30 national points, allowing him to extend his lead over No. 2 Aaron Kleier (Clermont, Queensland) to 64 national points.

Going 1-for-3, Richardson delivered the top score at the Berry Showgrounds when he bested Velvety Elvis (Throsby & Russell Bucking Bulls) for a tour stop best 86.5 points in Round 2.

Richardson gained one position in the national standings as he seeks his first PBR Australia Championship in 2022, climbing from No. 4 to No. 3. He is now within 71 points of No. 1 Heffernan.

Going 1-for-3, Willis rode Lower Belford (Shultz Bucking Bulls) for 80.5 points in Round 1.

In the bull pen, I’m Cool (Lazy G Bucking Bulls) and Told Ya So (Throsby & Russell Bucking Bulls), bucked a level above the rest, tying for the Bull of the Event honor. Each scored 43.5 points, I’m Cool earned the score in Round 2 when he bucked off Ben Gard (Albury, New South Wales) in 1.6 seconds, while Told Ya So posted the marks in the championship round when he upended Couling in 1.9 seconds.

The 2022 PBR Australia season will continue Saturday, May 21 for the third, and final, iteration of the 2022 PBR Origin in Brisbane, Queensland. Action inside Brisbane Entertainment Centre will get underway at 7:00 p.m. AEDT.