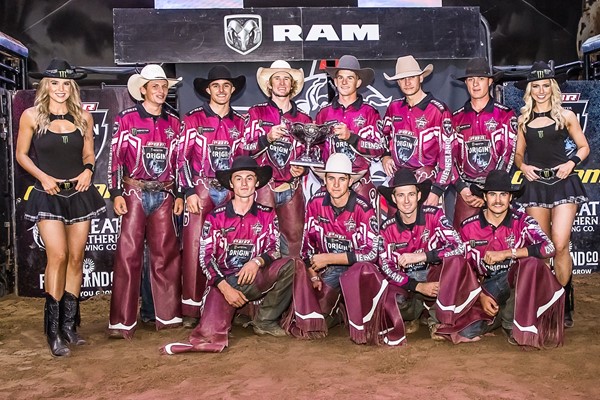 The Maroons were quick to strike in their first out of the evening.

Down but not out, Lachlan Slade (Tamworth, New South Wales) righted the ship for Team New South Wales, igniting a comeback which nearly led to the Blues’ first ever event win in the PBR Australia Monster Energy Tour Origin tournament.

Matched up against A Force (ST Bucking Bulls), Slade matched the bovine athlete jump-for-jump, en route to an 83-point score.

Preventing a shutout in Round 1, Team New South Wales entered Round 2 trailing Team Queensland by 410 points.

New South Wales Captain, and 2016 PBR Australia Champion, Cody Heffernan (Singleton, New South Wales) set the tone early for his contingent in the second round. After watching on as rival captain Kleier was bucked off by Kit Carson (Throsby & Russell Bucking Bulls) in a swift 1.94 seconds, Heffernan responded with a resounding 86-point ride atop Call Me Joe (Throsby & Russell Bucking Bulls).

While both the Maroons and Blues registered buckoffs in their outs that followed, Will Purcell (Albury, New South Wales) was next to convert for Team New South Wales, bringing his home state team within 243.5 points after he rode G Shock (Throsby & Russell Bucking Bulls) for 80.5 points.

Andersen, however, was the only rider to cover for Team Queensland in Round 2.

Compliments of their resurgence, Team New South Wales kept their hopes alive, entering the bonus round within a mere 158.5 points of Team Queensland.

After both Slade and Nock bucked off for the Blues, Captain Kleier clinched the win for Team Queensland when he covered Big Buck Hunter (ST Bucking Bulls) for 86 points.

With crucial national points also on the line, Team Queensland’s Andersen finished atop the podium, earning 71 national points. After traveling to Newcastle ranked No. 6 in the race for the 2022 PBR Australia Championship, Andersen surged to No. 3, now within 66.5 points of the top position.

In the bull pen, Posting Bail (Throsby & Russell Bucking Bulls) led the pen. He was marked an event-best 44 points for his 2.71-second buckoff of Caiden Sandilands (Rockhampton, Queensland) in Round 2.

The three-part 2022 PBR Origin tournament continues on Saturday, April 23 in Tamworth, New South Wales. Action for PBR Origin II – Tamworth from the AELEC Arena gets underway at 7:00 p.m. AEDT. Tickets are still available and can be purchased at pbraustralia.com.au.

The 2022 PBR Australia season will continue April 8-9 for the Monster Energy Tour’s Toowoomba Invitational at Meatstock. Action at the Toowoomba Fairgrounds will get underway at 4:30 p.m. AEDT on Friday, April 8, and at 12:00 p.m. AEDT on Saturday, April 9.