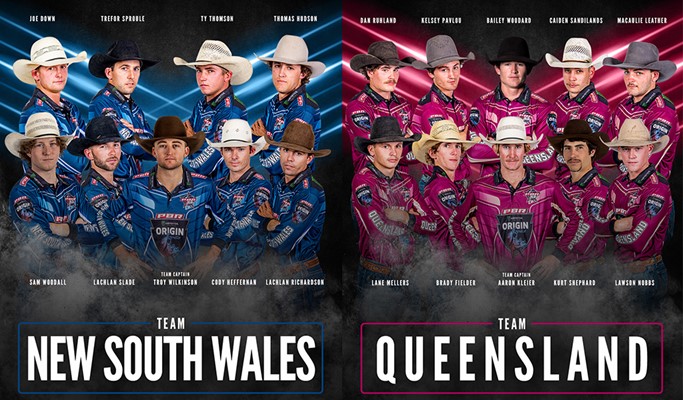 Ahead of the opening iteration of the 2021 PBR (Professional) Australia Origin event, the league has announced the complete 10-rider rosters that will represent Team New South Wales and Team Queensland at the state vs. state bull riding showdown.

Now a three-part series of tour stops, the PBR Origin is modeled after the State of Origin rugby league event that is considered Australian sport’s greatest rivalry.

Through the trio of events held July 3 in Newcastle, New South Wales, July 10 in Brisbane, Queensland, and July 17 in Cairns, Queensland, Team Queensland and Team New South Wales will go head-to-head to determine which state is the supreme bull riding powerhouse. With more than $45,000 on the line, and crucial national points awarded to the competing athletes, the PBR Origin Champions will be the team that wins two or more events in the series.

While the Captains were selected earlier in 2021, the aforementioned teams were determined based on the standings following the most recent PBR Australia Monster Energy Tour event in Rockhampton, Queensland, June 12.

Among the standouts on Team Queensland who will be keen to defend their title of PBR Origin Champion are:

Eager to avenge their loss from 2019, riders to note for Team New South Wales include:

Tickets for all iterations of the 2021 PBR Origin are on sale now. They can be purchased at Ticketek.com.au or pbraustralia.com.au.