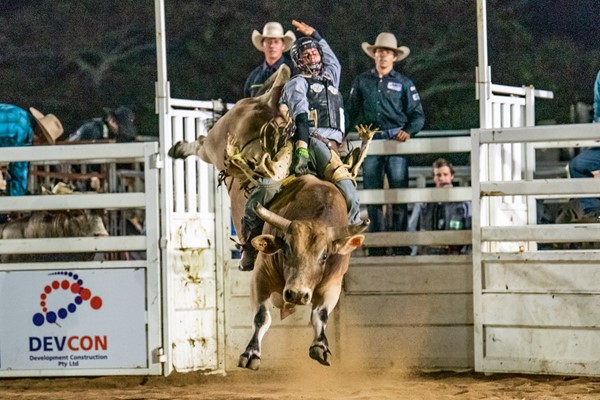 BURNETT HEADS, Qld – For the second time in league history, PBR (Professional Bull Riders) Australia will travel to Burnett Heads, Queensland, bucking into Burnett Heads Field with the fan-attended PBR Bull Mania, part of the sport’s Back to the Heartland Series, September 4.

PBR Australia’s Back to the Heartland Series regularly features the nation’s best riders squaring off against the rankest bucking bulls from across Australia. Fans will witness exhilarating 8-second rides and wrecks throughout the action-packed event as the PBR’s courageous bull-riding athletes attempt to conquer their 900-kilogram opponents.

In addition to the 30-rider Back to the Heartland Series event, PBR Bull Mania will also include an edition of the league’s Rising Stars junior program, featuring the nation’s top up-and-coming 16- and 17-year-olds attempting junior bulls in a one-round exhibition tournament.

The PBR Bull Mania at Burnett Heads Field will abide by a series of health standards and protocols, guided by the Queensland state government industry framework for safe events during COVID-19 (coronavirus).

PBR Australia debuted in Burnett Heads in 2019, with Ethan Watts (Tamworth, New South Wales) winning the event courtesy of his 2-for-3 effort. Rebounding from a 5.12-second buckoff atop Off The Planet (BK Bucking Bulls) registered in Round 1, Watts delivered the second-best score of Round 2 when he went he distance aboard Specsaver (Peter Wallace) for 85 points.

The New South Wales rider then clinched the victory, the first of his PBR career, when he topped the championship round with an 88-point ride on Bud Buster (Kasper Bucking Bulls/JD Bucking Bulls).

Thus far in 2021, the race for the year’s national championship is off to a feverish start.

At the first event of the new season, Kleier was dominant.

He delivered a monstrous, career-best 90.5-point ride atop Black Tuxedo (Peter Wallace) in Round 1, followed by an 82-point effort on Call Me Joe (Throsby & Russell Bucking Bulls) in the championship round to cement the win and surge to No. 1 in the national standings. Kleier is attempting to make history in 2021 as the first-ever rider in the PBR to capture the Australia Championship in four consecutive seasons

In a repeat of a fierce battle that unfurled throughout 2020, seven-time PBR World Finals Qualifier Lachlan Richardson (Gresford, New South Wales) finished runner-up at the event to conclude the first tour stop of the new season No. 2 in the national standings, within 16 points of No. 1 Kleier.

Young gun Macaulie Leather (Calliope, Queensland), however, delivered a fourth-place finish at the season-launch event, followed by a victory at the second tour stop of 2021 to surge to the No. 1 ranking in the 2021 PBR Australia national standings.

In the weeks since, the race has further intensified following a tour stops in Alice River and Rockhampton, Queensland.

Compliments of a third and second-place results, Kleier reclaimed the No. 1 spot in the national standings, now 19.5 points ahead of No. 2 Leather.

The PBR Bull Mania in Burnett Heads, featuring 30 of the nation’s top bull riders, will get underway on Saturday, September 4 at 5:00 p.m. AEST.

All riders will attempt one bull each in Round 1, with the Top 10 advancing to the championship round later that evening where they will attempt one additional bull in an effort to be crowned the event champion.

During the event, PBR Australia will also hold a Rising Stars competition, the league’s junior program that aims to create a seamless transition for the next generation of talent to progress to the professional ranks. Up to 12 of the nation’s top 16- and 17-year-old bull riders will compete in one round of competition, with the top-scored contender crowned the winner.

The evening’s festivities will conclude with a performance from The Rolling Stones Experience.

Tickets for PBR Bull Mania, which includes admission to both the PBR and Rising Stars events and Rolling Stones Experience, go on sale Thursday, June 17. They can be purchased online at oztix.com.au.