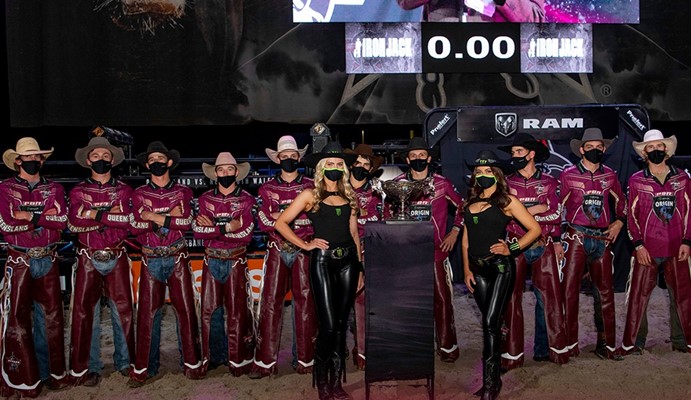 BRISBANE, QLD. – The 2021 PBR Origin tournament got off to an electric start Friday evening, as the raucous crowd inside Brisbane Entertainment Centre was kept on the edge of their seats until the final out as Team New South Wales and Team Queensland duked it out to determine which state is the supreme bull riding powerhouse.

Holding off a hard-charging Team New South Wales, Team Queensland won the opening stop of the three-part tournament, edging the Blues by one ride and a mere 88 points.

With the captains the first riders to leave the chutes, Team Queensland got off to a hot start.

As the opening round continued, first-time Origin rider Joseph Down (Musswellbrook, New South Wales) succeeded under pressure, putting the initial points for Team New South Wales on the board as he covered Told Ya So (Throsby & Russell Bucking Bulls) for 83.5 points.

While Team New South Wales inched within 1.5 points of their rivals, the close score was short lived.

Team Queensland extended their lead to 86 points the very next out, as Lawson Nobbs (Moura, Queensland) went the distance aboard Broken Halo (Throsby & Russell Bucking Bulls) for 84.5 points.

As the next rider to leave the chutes for the Maroons, three-time PBR Australia Grand Finals qualifier Lane Mellers (Mundubbera, Queensland) continued Team Queensland’s growing momentum, contributing 86 points to the contingent’s total as he reached the requisite 8 aboard Crackalackin (Throsby & Russell Bucking Bulls).

Facing a rematch in Chemical Weapon (MJ/Keliher Bucking Bulls), Woodall avenged a close 6.1-second buckoff aboard the bull from the 2020 Tamworth Iron Cowboy, this time besting the animal athlete for an 81-point score. As a result, Woodall shrank the Maroons’ lead from 172.5 points to 91 points.

In Round 2, however, the tables turned, and Team New South Wales made their presence known as they sought to avenge defeat from the 2019 State of Origin event.

While Captain Kleier once again converted for Team Queensland, covering Roam Aviation High Risk (Dunne Bulls) for 84.5 points, to give the Maroons their second momentous start to a round, yet another first-time Team New South Wales competitor ensured the celebration was short lived.

The 8-second effort was the first of three rides recorded by Team New South Wales, that Team Queensland failed to answer.

Rookie of the Year contender Macaulie Leather (Calliope, Queensland) then briefly returned Queensland to the top of the leaderboard, snapping the team’s backwards slide when he rode Big Buck Hunter (ST Bucking Bulls) for 85.5 points.

Covering Freckles Brown (Peter Wallace) for the third time in as many attempts, this go marked a round-best 87 points, Richardson gave the Blues an 84-point lead ahead of the bonus round.

In the final outs of PBR Origin I – Brisbane, Shephard, Leather, Mellers and Captain Kleier were tapped to ride one final time for Team Queensland, while Down, Heffernan, Richardson and Slade earned the chance to compete one final time inside Brisbane Entertainment Centre for Team New South Wales.

As the first man to leave the chutes, Shephard catapulted Team Queensland back to the top of the event-leaderboard when he covered Ambush (MJ/Keliher Bucking Bulls) for 86.5 points. Mellers then extended the nation’s lead to 88 points when he rode POA Fully Locked & Loaded (Dittmann Bucking Bulls) for 85.5 points.

The event then came down to the final two riders – Queensland Captain Kleier and New South Wales sensation Slade, both of whom went 2-for-2 in the opening rounds.

Slade, however, proved no match for the fierce bovine athlete as he was sent to the ground in 3.38 seconds.

Going a combined 8-for-24 to collect 680.5 points, Team Queensland outlasted a hard-charging Team New South Wales by one ride and 88 points to win the opening installment of the three-part 2021 PBR Origin tournament.

With crucial national points also on the line, Team New South Wales’ Slade was the top performing individual rider, tallying 172 points to earn 72.5 national points. While he began the tournament stop No. 11 in the nation, he is now No. 5, and within 114 points of No. 1 Kleier, as he seeks his first PBR Australia Championship.

Kleier finished second in the individual race, also going 2-for-3, to net 53 national points. The runner-up effort allowed him to further his stronghold on the No. 1 ranking, extending his lead from 19.5 to 60 points over No. 2 Leather.

Richardson and Heffernan tied for third courtesy of their matching 87-point scores, each colleting 38.5 national points. Richardson climbed from No. 5 to No. 4 in the national standings, while Heffernan surged from No. 13 to No. 10.

Rounding out the Top 5 in the individual race was Mellers. He netted 22 national points, elevating him one position in the race for the 2021 PBR Australia Championship, now No. 7 and within 141.5 points of No. 1 Kleier.

In the bull pen, Cattle King Boogers Beach continued his dominant season, earning his fifth consecutive Bull of the Event honor. The fierce bovine was marked 44 points when he bucked off Slade in 3.38 seconds in the bonus round.

Fans can relive all the action from PBR Origin I – Brisbane on RidePass starting at 8:00 a.m. AEST on Sunday, July 11, at RidePass.com or via the RidePass app available on iOS, Android and Roku.

The three-part 2021 PBR Origin tournament continues on Saturday, July 17 in Cairns, Queensland. Action for PBR Origin II – Cairns from the Cairns Convention Centre gets underway ay 7:30 p.m. AEST. Tickets are still available and can be purchased at Ticketek.com.au or pbraustralia.com.au.