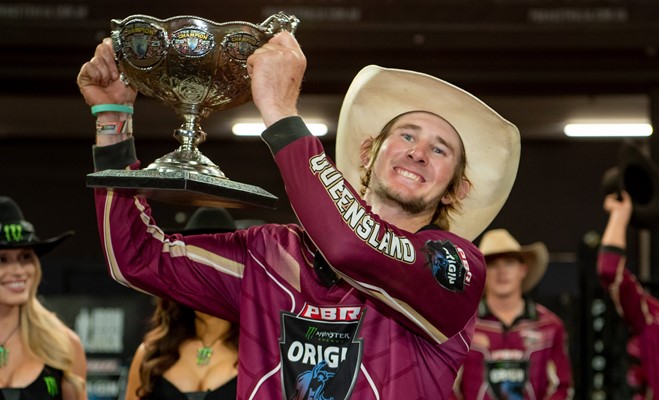 CAIRNS, QLD. – Competing in front of a home state crowd, Team Queensland was dominant Saturday evening at the Cairns Convention Centre in Cairns, Queensland, defeating Team New South Wales by a commanding five rides and a massive 415 points to win their second event in the 2021 iteration of the state vs. state bull riding tournament, and be crowned the 2021 PBR Origin Champions.

“It feels bloody awesome,” Team Queensland Captain Aaron Kleier (Clermont, Queensland) said moments after the Maroons’ victory. “Happy with all the boys, they all had a day and got in.”

From the moment the first rider representing Team Queensland erupted from the chutes, the Maroons were atop the leaderboard, never once relinquishing the top spot to Team New South Wales.

After Wilkinson covered Random Assault (Dunne Bulls) for 82.5 points, Kleier brought the raucous crowd to its feet when he climbed aboard unridden Tribal (Dunne Bulls), who had never once been covered in his 12 prior outs on record.

Kleier, however, cracked Tribal’s code, going the distance aboard the fierce bovine athlete for 84.5 points to give Queensland a 2-point lead.

Holding an 85-point lead midway through Round 1, Team Queensland then went on a tear, outscoring Team New South Wales three rides to one to enter Round 2 with an impressive 254-point lead.

Cody Heffernan (Singleton, New South Wales) was the lone rider to make the whistle for the Blues, riding Humdinger (Dunne Bulls) for 83.5 points.

In Round 2, Team Queensland’s momentum continued to roll in seemingly unstoppable fashion.

Young gun Kelsey Pavlou (Toora, Queensland) was the first to convert for the Maroons in the second round, rising to the occasion when he rode Slick 60 (Peter Wallace) for 80.5 points to extend his state’s lead to a then event-best 334.5 points.

After Joseph Down (Musswellbrook, New South Wales) and Woodall contributed two unanswered rides for the Blues, riding Get Ya Freak On (Diamond J Rodeo Co.) for 83.5 points and Chemical Weapon (MJ/Keliher Bucking Bulls) for 80.5 points, respectively, to climb within 170.5 points of Team Queensland, the Maroons mounted a rally for the record books.

The trio of scores for Team Queensland was then punctuated by Nobbs’ 84-point score on Notorious (Brandenburg Bucking Bulls), allowing the home state contenders to surge to a 419.5-point lead.

With just two riders from each contingent left to ride ahead of the bonus round, Nobbs’ score all but guaranteed Queensland their second victory at the state vs. state tournament.

While each state registered a score in their final duo of Round 2 outs, New South Wales contender Lachlan Slade’s (Tamworth, New South Wales) 85-point ride aboard High Class Hooker (Brandenburg/MJ Bucking Bulls) was not enough to keep his team’s hopes of a bonus round comeback alive.

As the last man to leave the chutes in Round 2, Queensland’s Lane Mellers (Mundubbera, Queensland) covered Get A Haircut (Diamond J Rodeo Co.) for 82 points, giving Queensland a 416.5-point lead ahead of the bonus round and clinching the Maroons the 2021 PBR Origin Championship.

Despite the 2021 PBR Origin Champion determined, both teams continued to deliver ferocious efforts in the bonus round.

Slade, however, ensured Team New South Wales concluded the tournament on a high note, riding Cattle King Boogers Beach (Dittmann Bucking Bulls) for a monstrous, and career-best, 90 points. The 90-point effort was just the second of the season on Australian soil.

When the dust settled inside Cairns Convention Centre, Team Queensland out rode Team New South Wales by five rides, with the final score 1,005.5-590.5, propelling the Maroons to their second PBR Origin Championship. Team Queensland previously won PBR Origin I – Brisbane, defeating Team New South Wales by a mere 88 points to jump to an early lead in the three-part tournament.

“Its amazing,” Nobbs said of his individual victory. “Good to get two bulls rode. Would have been good to get the third one, but still good.”

In the race for the 2021 PBR Australia Championship, Nobbs rose three positions, climbing from No. 10 to No. 7, surging within 89.5 points of No. 1 Kleier.

The captivating bull earned his sixth consecutive Bull of the Event title in Cairns, splitting the honor with Razor Sharp (Peter Wallace) after both bulls posted 45-point scores.

Both bucking in the bonus round, Cattle King Boogers Beach earned the marks when he teamed with Slade for his awe-inspiring 90-point ride, while Razor Sharp turned heads when he buked off Shephard in 3.22 seconds.

“We’re real proud of these animals and between us, I think we have the two best bulls in the country at the moment,” Peter Wallace said. “It was great.”

The 2021 PBR Australia season will continue Saturday, July 31 in Rockhampton, Queensland, at the Great Western Hotel. Action for the Monster Energy Tour’s Rockhampton Invitational, part of the Back to the Heartland Series, will get underway at 7:00 p.m. AEST. Tickets are still available and can be purchased at pbraustralia.com.au.