Kleier regains control of title race with victory in Queanbeyan 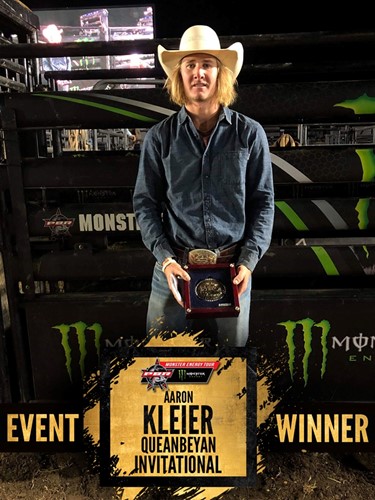 On Saturday night it was Aaron Kleier who reigned supreme at the 2019 Queanbeyan Invitational when the PBR Australia Monster Energy Tour invaded the Southern Highlands.

The 21-year-old fortified this place top the 2019 PBR Australian National Standings with a 2-for-2 performance which resulted in a 505 championship points haul and pushed his total to 4228.33 points.

With the win, Kleier extended the buffer between himself and his nearest opponents to over one-event with the gap now sitting at 780.83 points to Brady Fielder and 1863.33 points to Lachlan Richardson.

Kleier opened his account with an 80.5-point ride aboard Cowboy Tough (Diamond S Bucking Bulls) mid-way through Round 1. While the score wasn’t anything to write home about, it was a critical 8-second ride for the defending National Champion as he looked to pick up his first win on tour in over three months.

After watching his two main championship rivals buck off preceding his Round 2 trip, Kleier faced Maximum Rat (George Hempenstall) for the second time in his career. The pair battled it out around to the left, combining for 86 electrifying points which catapulted the Clermont cowboy to the top of the leaderboard with just a handful of riders remaining.

His aggregate total score of 166.5 points was good enough to hold on for a narrow win, with the No. 5 ranked Cliff Richardson (Gresford, NSW) finishing runner up in Queanbeyan.

Richardson split seventh place in the opening round with Kleier thanks to an 80.5-point ride on Taco (George Hempenstall). The 27-year-old then put together one of the most exciting trips of the night, covering Matt Black (Throsby & Russell Bucking Bulls) into his hand for 84.5 points.

The Gresford talent collected 305 points towards the gold buckle race thanks to his two-bull total of 165 points. Despite his runner-up finish, Richardson is now outside 2000 championship points adrift with just three regular-season events remaining.

Also finishing a perfect 2-for-2 at the Queanbeyan Showgrounds was Lane Mellers. The Mundubbera bull rider made a business decision in Round 1, keeping a 77-point score attained aboard Air Blade (George Hempenstall).

The decision proved to be a good one after he added a further 80-points in the second round by riding Black Amigo (John Gill & Sons) to finish third with a 157.5-point aggregate total.

The 19-year-old picked up 230 points which moved him up into sixth place in the National Standings.

View the Full Results from the 2019 Queanbeyan Invitational

After producing the Round 1 winning ride, Will Purcell wound up finishing the event in fourth place. The Victorian cowboy covered Western Ways (Diamond S Bucking Bulls) for 83-points to take home the maximum points in the opening round.

The 205-point finish moved Purcell up two spots in the Australian rankings to now sit in 14th place and the 25-year-old looks in good shape to qualify for November’s Grand Finals.

No. 2 ranked Brady Fielder finished fifth in the event after taking full advantage of a re-ride opportunity in Round 1 where the Clermont rookie covered Crackalackin (Throsby & Russell Bucking Bulls) for 82.5 points.

Sharing the fifth-place finish with Fielder was Lawson Nobbs. The 22-year-old was one of the biggest movers up the standings in Queanbeyan after he rode Ransom 2 (John Gill & Sons) for 82.5 points in the opening round.

The Moura bull rider and Fielder both earned 110 National Standings points with Nobbs now ranked 15th in the country.

Also recording qualified rides in Round 1 were Grafton’s Robert Kicks and Bulahdelah’s Justin Robards who both finished the aggregate competition with 82 points. Dingo’s Bailey Woodard was also successful scoring 81.5 points in the opening round.