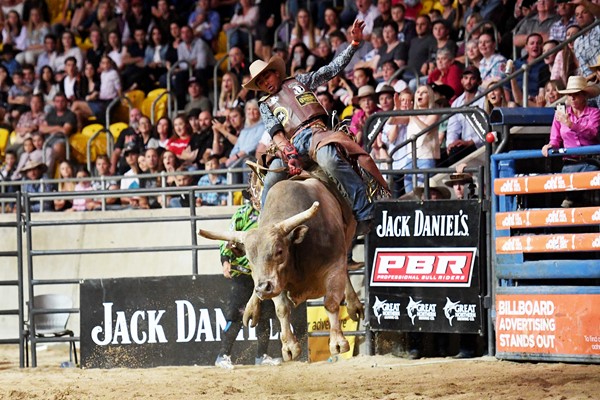 Divino covered Too Funky, Bunn Bucking Bulls in round one for 83.25 points, and then stepped out and rode Stuart Timms’ Russian Roulette for 85.75 points in round two.

The Championship Round saw SweetPro’s Hillbilly Deluxe, Maynes Bucking Bulls secured Divino the event win with a 90.75 points and riding 3/3.

Brazil’s Junior Quaresma solidified the third-place slot. He won round 2 earning 87.5 points and another 87.5 in the championship round on Light Em Up.

SweetPro’s Call Me Joe, TNR Bucking Bulls was the highest marked bull of the night with 44.75 points. He displayed to utmost athleticism in the championship round sending Lawson Nobbs home with no final score.

From here the tour heads to the tropical north, where Townsville Queensland welcomes Australia’s second Iron Cowboy (17-18 November), where the riders will display two nights of pure athleticism against the biggest and best bucking bulls in the country.