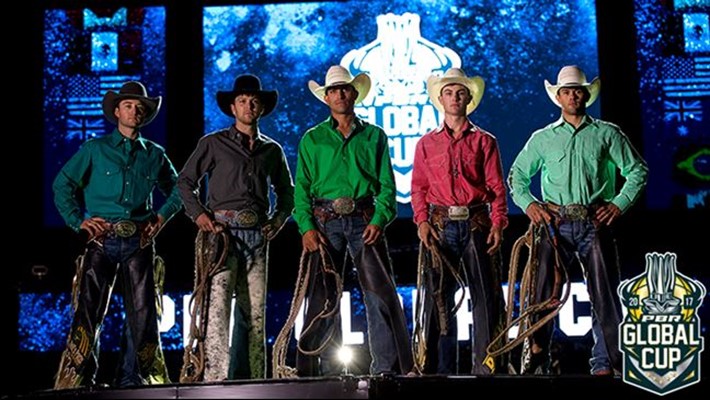 PUEBLO, Colo. – Professional Bull Riders (PBR) has announced select riders who have qualified to compete in the inaugural PBR Global Cup – a five-country bull riding tournament – that is set to take place Nov. 9-11 in Edmonton, Alberta, at the state-of-the-art Rogers Place.

The PBR Global Cup teams were set according to the PBR world standings following this past weekend’s Music City Knockout:

* Note: Triplett is a replacement for two-time World Champion J.B. Mauney, who is unable to compete in Edmonton because of season-ending shoulder surgery.

The Global Cup offers host countries “home-field advantage,” and Team Canada will compete with 14 riders on their team versus the seven riders competing for the visiting teams.

In addition to the riders named, teams will add two additional riders – a national qualifier from each country’s PBR tour and a coach’s pick.

The dates and venues for PBR Global Cup competition in four additional countries will be announced in the future.

The national qualifiers and coaches picks for each country will be announced at a date to be determined.

“In bull riding, the PBR Global Cup is the ultimate expression of national pride on a world stage, transforming an individual performance-based sport into a team-based battle for national pride,” said Sean Gleason, PBR CEO.“At the center of our international growth strategy, the PBR Global Cup will be the largest event staged in any one of our international territories and the only event in each country to feature the top riders coming for a single event to claim bragging rights for the title of Toughest Nation on Dirt.”

The prestigious Global Cup Trophy will be awarded to the team with the highest aggregate score over the course of the event based off each team's best 14 qualified rides.

The Global Cup Trophy emphasizes native soil as the object of national pride.  The trophy consists of five individual horns featuring each country’s national colors and serving as a vessel for each nation’s dirt. In order to complete the trophy and proclaim world dominance, one team must win and possess each respective country’s horn.

Riders in this annual event will earn money based on their team’s performance. The first place team will split $400,000 (Canadian dollars) while the last place team will share $42,000. Each rider will also have an opportunity to win an additional $100,000 from their individual performances each day.

The 2017 Global Cup coaches, as voted on by the bull riders in each country, were also announced this past weekend:

PBR is finalizing primary broadcast partnerships to televise the Global Cup in each country. Additionally, the events will be distributed to more than 450 million homes in 45 territories through PBR’s existing international broadcast partners outside of its operating territories.