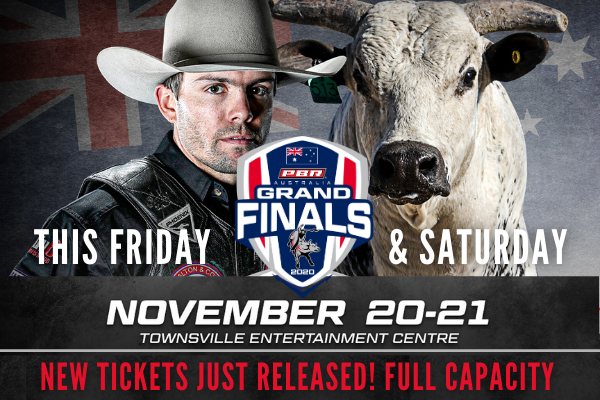 TOWNSVILLE, Queensland is THE place to be this weekend, November 20-21, for the PBR Australia’s Monster Energy Tour Grand Finals. The Queensland Premier’s announcement of eased COVID-19 restrictions will give thousands more bull riding fans the chance to see the 2020 PBR Australia Champion be crowned in person. With the Townsville Event Centre now approved for 100% capacity under the new Queensland Health guidelines, all remaining available seats have now been released for sale for what was shaping up to be a full sell out event.

General Manager of PBR Australia, Glen Young was thrilled the announcement would allow more fans in on the action. “Townsville is home to some of our most passionate bull riding fans and with the competition heating up between (insert rider name & insert rider name) over the last few weeks we can’t think of a better way to finish the 2020 season than with a full stadium”

“With no restrictions on Queensland travel and the NSW border relaxed for those outside of Greater Sydney we are hoping to see more of our PBR community make the last-minute trip to Townsville to experience all the up close live action, bring some noise and atmosphere to the TECC and of course get to experience all the incredible food, hospitality, attractions and entertainment on offer.”

Australian Country Music stars, James Johnston and Josh Setterfield, will be headlining with live music with plenty of entertainment on offer for families and locals eager for a night out.

In what has been a tough, long and interrupted season, riders have had the opportunity to compete at 19 Monster Energy Tour and Touring Pro Division events across Australia to earn points towards the Australian National Standings, all in an effort to be the No.1-ranked cowboy at year’s end and earn the coveted PBR Australia title.