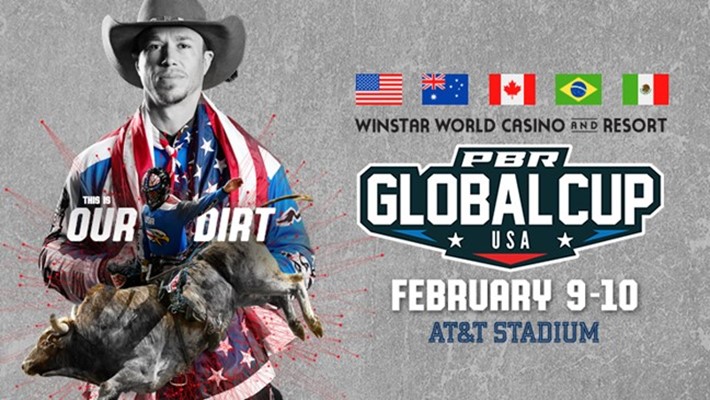 AT&T Stadium will host the third stop of the PBR Global Cup.

ARLINGTON, Texas – PBR (Professional Bull Riders) has announced that the PBR Global Cup, the only nation vs. nation international bull riding competition, will make its third stop at AT&T Stadium in Arlington, Texas on February 9 and 10, 2019 as the WinStar World Casino and Resort 2019 Global Cup USA.

The five-nation tournament among the world’s best bull riders and rankest bulls debuted in Edmonton, Alberta, Canada in November 2017, followed by Sydney, Australia in June 2018.

As PBR continues to grow in popularity in the five countries in which it operates tours, the organisation launched a global tournament featuring top athletes from Australia, Brazil, Canada, Mexico and the United States riding for national pride, record purses and the very soil they compete upon. The $750,000 purse in Arlington makes the PBR Global Cup the sport’s second highest-paying event next to the PBR World Finals in Las Vegas.

In Arlington, the PBR Global Cup will debut a new competitive element for the international competition. The home team, which in the past has received an advantage by fielding more riders whose qualified ride scores contributed to the overall team aggregate, will now be split into two teams of seven bull riders.

For the U.S. stop, the host country will add a team comprised exclusively of Native American riders, called the Wolves, competing against the other American team, the Eagles, and all visiting teams.

Two-time PBR World Champion Justin McBride (Elk City, Oklahoma), who guided Team USA to its win in Edmonton and fourth place finish in Australia, will return to lead the Eagles, while Wiley Petersen (Fort Hall, Idaho; Shoshone Bannock) will coach the Wolves. Both U.S. teams of seven riders and one alternate will be comprised exclusively of coaches’ picks. For each visiting nation, the first two riders will be coaches’ picks with the remainder of the roster selection process to be announced at a future date.

While the full USA rosters, along with those for Australia, Brazil, Canada and Mexico, will be named later this season, each coach has already selected two competitors:

“This is without a doubt my favorite PBR event to be a part of,” said two-time World Champion and Team USA coach Justin McBride.

PBR has competed in AT&T Stadium, home of the Dallas Cowboys, since 2010, including the league’s largest single-day event, the WinStar World Casino and Resort Iron Cowboy, powered by Kawasaki, which drew more than 46,000 fans in February of 2018.

Tickets for the WinStar World Casino and Resort Global Cup USA start at just $10 and will go on sale August 23, at 10am CT. Tickets are available at SeatGeek.com, PBR.com, or by calling PBRDirect at (800)732-1727.

CBS Sports will broadcast a one-hour show from the two-day Global Cup USA, which will also be brought to fans on RidePass, the PBR’s western sports digital network.

Additional dates for the tournament’s visits to Brazil and Mexico will be announced in the future.

“PBR has been a great partner for AT&T Stadium since we opened in 2009 sharing our vision for innovation and entertainment,” said Stephen Jones, COO/EVP, Dallas Cowboys. “We’re beyond thrilled that a new and exciting format for a truly international bull riding competition will be available for our fans to mark the 10th anniversary of our incredible relationship.”

“The PBR Global Cup transforms an individual, performance-based sport into a team battle for national pride, which has immediately produced some of the most spirited and passionate bull riding our sport has ever seen,” said Sean Gleason, CEO, PBR. “It is fitting that the inaugural U.S. stop for crowning the world’s best bull riding nation is held at AT&T Stadium, the venue that’s hosted the biggest PBR event of all time.”

“We love to partner with people who dream big,” said Arlington Mayor Jeff Williams. “When the PBR Global Cup comes to AT&T Stadium, we see another big dream come true in Arlington.”

The event will feature entertainment all weekend long including a Global Cup Fan Zone at Arlington’s Texas Live! sports entertainment complex, which houses the new PBR Texas Cowboy Country Bar, the spectacular 18,000 square foot flagship branded bar operated by Cordish & Co.  PBR will utilize stages in the district for the entertainment portions of the Global Cup Fan Zone, including live bands throughout the day, PBR Q&A sessions, Flint Rasmussen’s Outside the Barrel show, cowboy church on Sunday morning and the official kickoff and after parties.  Fans are encouraged to check PBR.com for entertainment updates.