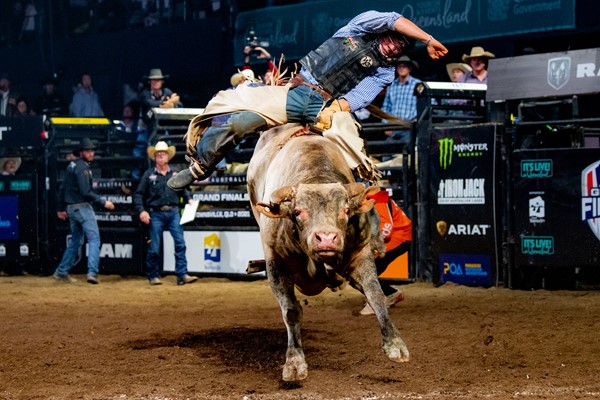 ROCKING OUT IN ROCKHAMPTON – This weekend, for the 32nd time in league history, PBR Australia will travel to Rockhampton, Queensland. As the third event of the 2022 season, and second stop in Rockhampton, the PBR Monster Energy Tour Rockhampton Invitational will buck into the Great Western Hotel on Friday, February 12 at 7:00 p.m. AEDT.

THIS WEEKEND’S FORMAT – The PBR Australia Monster Energy Tour’s Rockhampton Invitational at Great Western Hotel will feature three rounds of bull riding. After all competing bull riders attempt one bull each in Round 1 and Round 2, the Top 10 will advance to the championship round where they will attempt one final bull in an effort to claim the event win. The event champion will be determined by the rider with the highest total score from their three draws. One rider will have the opportunity to earn a maximum 105 national points, with 60 to be awarded to the event victor, and 15 to each round winner.

A NEW NO. 1 – BRADY FIELDER – On the spurs of last weekend’s PBR Australia Monster Energy Tour event in Scone, New South Wales, there is a new No. 1 ranked rider in the race for the 2022 PBR Australia Championship – Brady Fielder. While he travelled to White Park Arena No. 2 in the national standings, Fielder parlayed a perfect 2-for-2 effort into his first event win of the season, garnering a critical 72.5 national points and overtaking the top position in the national standings. In Scone, the 2020 PBR Australia Grand Finals event winner got off to a hot start in Round 1, delivering the third-best score when he made the requisite 8 aboard Shogun Willy for 85 points. Fielder then surged to the top of the event leaderboard in Round 2. He went the distance atop Chaos for 86.5 points to tie for the round win and clinch the event victory. In the standings, Fielder surpassed an injured Kurt Shephard for the top position, now 50.5 points out front. Fielder will look to gain even further ground this weekend in Rockhampton when PBR Australia holds its third event of the season. He has drawn Territory Ringer in Round 1 and a rematch with Black Tuxedo in Round 2.

HEFFERNAN FLAWLESS IN SEASON DEBUT – Last weekend in Scone, 2016 PBR Australia Champion Cody Heffernan made his season debut and did so in flawless fashion. Going 2-for-2, Heffernan finished second to collect a crucial 64 national points. Heffernan was unrivaled in the opening round, rising to an early lead in the event when he rode Cliffhanger for an tour stop-best 88.5 points. While Heffernan again made the 8 in the final round, riding Silverback for 80 points, the score was not enough to remain atop the leaderboard, finish three points shy of the win in the aggregate. Heffernan may have begun the first PBR event in New South Wales since 2019 unranked, but he catapulted to the No. 3 position in the standing compliments of the silver finish. He is now just 63.5 points back of No. 1 Fielder. In Rockhampton, Heffernan will return to the lineup facing Ima Booga Too in Round 1 and Damage Control in Round 2.

FAMILIAR WATERS – This weekend, Round 1 and Round 2 of the PBR Rockhampton Invitational will each feature one rematch. In Round 1, Wyatt Milgate will face Mixed Culture for the second time in his career. The two first went head-to-head in 2021 in Emerald, Queensland, with Milgate hitting the ground in a swift 3.04 seconds. Round 2 will be headlined by the renewed rivalry between Australian No. 1 Brady Fielder and Black Tuxedo. Having danced twice prior, Fielder will look to remain perfect in their third meeting. Fielder first rode Black Tuxedo in Newcastle, New South Wales in 2019, making the requisite 8 for 86 points. Two years later, they next faced off in Townsville, Queensland during the 2021 PBR Australia Grand Finals as Fielder went the distance in the championship round for an 89.75-point score.

PAST ROCKHAMPTON EVENT WINNERS – One of the longest tenured events in PBR Australia history, since the Queensland city welcomed the league for the first time in 2006, PBR has held a total of 31 events in Rockhampton, including seven tour stops throughout the 2021 campaign, and once to date in 2022. The complete list of past winners is as follows:

BULL PEN – This weekend’s Monster Energy Tour event in Rockhampton, Queensland, will mark the PBR debut for many animal athletes. In Round 1, 5 bulls will buck for the first time in PBR competition, while in Round 2, seven bovine athletes will be making their first out in PBR competition.

NEXT UP – The 2022 PBR Australia season will continue on Saturday, March 19 in Mildura, Victoria. Action for the Monster Energy Tour’s Mildura Invitational will get underway at 7:00 p.m. AEDT.