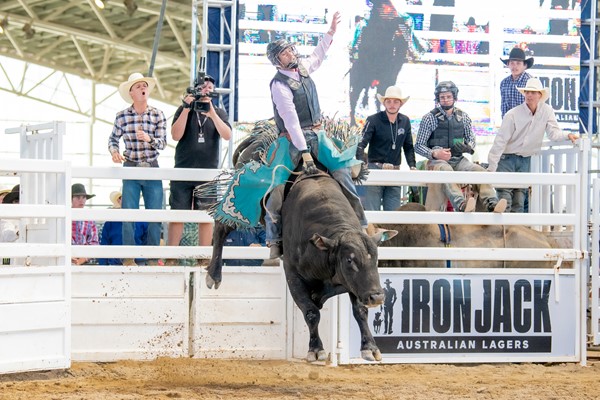 While the 2020 season was full of uncertainty, there was always one constant – the rank bull power awaiting Australian’s finest riders at each tour stop.

Today we look back at those trips, reliving some of the most dominant feats of athleticism by the league’s top animal athletes.

Tying for the second-best bull score of the 2020 season, bulls were marked 44.5 points six times throughout the year, with six different animal athletes recording the impressive score.

First to accomplish the feat was BK Bucking Bulls’ Jersey Joe in Caboolture, Queensland. Matched with Beaudesert-native Jay Borghero, Jersey Joe sent him to the dust in a quick 1.79 seconds to earn the score and be anointed bull of the event.

Bucking for just his second season with PBR Australia, the score is also the high-marked trip of Jersey Joe’s career. Earlier in the double-header in Caboolture, Jersey Joe also wowed in the opening event, marked 44 points when he was ridden by Sam Woodall for a Round 1-winning 88 points.

Following the Caboolture tour stops, the subsequent weekend’s event in Bundaberg in early October was dominated by the league’s bovine competitors with four 44.5-point trips registered.

In the opening event, the Dittmann Bucking Bulls standout logged the score when he dispatched Caiden Sandilands in a quick 2.44 seconds in the championship round. As the evening continued, Cattle Kings Boogers Beach again posted the marks in the second event, this time bucking off Ty Thomson in 3.31 seconds in the final round.

Both trips in Bundaberg not only tied for the top score of the bull’s career, but also earned Cattle King Boogers Beach consecutive bull of the event honors.

“Boogers Beach is our next coming superstar I reckon,” Jason Dittmann said. “He’s the next one up their behind Locked & Loaded.”

While Cattle Kings Boogers Beach did not best his Bundaberg outs, he concluded the year with his first selection to buck at the PBR Australia Grand Finals.

Earning two trips, he earned a 43.25 and 43.75-point score for his outs with the nation’s Top 2 riders, Lachlan Richardson and Aaron Kleier, respectively. While Richardson covered the bull, the lone rider to do so in 2020, marked 87.75 points, Kleier was bucked off in 2.37 seconds.

For POA Fully Locked & Loaded the out was part of a banner season for the bull, concluding the year crowned the 2020 Bull of the Grand Finals.

Delivering two head-turning outs at the 2020 PBR Australia Grand Finals, after logging the second-best bull score of the event in Round 2, marked 43.75 points when he bucked off Lachlan Slade in 4.51 seconds, the powerful bovine athlete posted the top score of the Grand Finals in the championship round.

Matched up with Kurt Shephard, POA Fully Locked & Loaded sent the veteran rider to the dirt in 3.97 seconds to earn a commanding 44-point bull score.

“He’s like a kid to us, he’s part of our family,” Dittmann said of Fully Locked & Loaded. “When we drive our bulls, and when we feed our bulls, he’s the first there. When he hears that grain bin crack, he’s the first one there. He loves it. And when he knows he’s going on that truck, he knows something is going on when he gets in that chute. As soon as that chute gate opens, he just explodes. “

The final two 44.5-point bull scores of the year were registered at the final regular-season double-headers of the year in Toowoomba and Airlie Beach.

Earning both Peter Wallace bovines the high-marked score of the event, Pretty Boy topped the bull pen in Toowoomba when he bucked off Cody Heffernan in 3.14 seconds, while Black Tuxedo led the way in Airlie Beach when he bucked off Woodall in 5.91 seconds.

Only once in 2020 was a bull marked 45 points or more. The lone bovine to accomplish that feat was Dunne Bulls’ Home Grown.

Home Grown bucked four more times in 2020, twice more marked in excess of 40 points, including his 43-point out in Beaudesert when he bucked off Sandilands in 5.24 seconds.

Relieve these moments, and more, on-demand on RidePass. Watch all the 2020 PBR Australia Monster Energy Tour events at RidePass.com or via the mobile app.