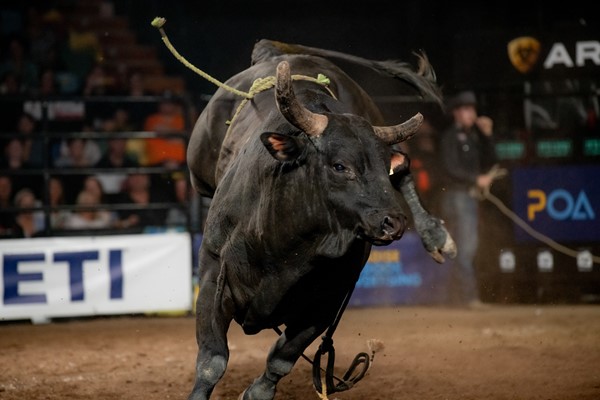 The 2022 PBR Australia season gets underway on Dec. 31 in Rockhampton, Queensland.

AND SO IT BEGINS – This weekend, for the 31st time in league history, PBR Australia will travel to Rockhampton, Queensland as the 2022 season gets underway. The season-launch PBR Monster Energy Tour Rockhampton Invitational will buck into the Great Western Hotel on Friday, December 31 at 7:00 p.m. AEST.

THIS WEEKEND’S FORMAT – The PBR Australia Monster Energy Tour’s Rockhampton Invitational at the Great Western Hotel will feature two rounds of bull riding. After all competing bull riders attempt one bull each in Round 1 and Round 2, the event champion will be determined by the rider with the highest total score from their three draws. One rider will have the opportunity to earn a maximum 80 points, with 50 to be awarded to the event victor, and 15 to each round winner.

WOODALL RIDES INTO ROCKHAMPTON HIGH ON GRAND FINALS VICTORY – Only one rider will travel to the season-launch event in Rockhampton having won the last PBR event he compete at – Sam Woodall. Courtesy of a near-perfect 3-for-5 showing, Woodall won the prestigious 2021 PBR Australia Grand Finals event title, along with $11,800. Woodall was electric on Championship Saturday for the year-end event, rebounding from a dismal opening day of competition when he was bested by Breaking Bad in 4.63 seconds in Round 1, and Blinky Bill in 4.96 seconds in Round 2. In a must-ride situation, Woodall snapped his backwards skid at the Grand Finals when he covered Super Natural for 86.25 points, the second-best score of Round 3. He continued to climb the leaderboard in his very next out, winning Round 4 when he bested Drag Iron for 85.75 points. Woodall then cemented his event win by reaching a crucial career milestone. In near picture-perfect form, the 23-year-old rode POA Fully Locked & Loaded for 90 points, the first 90-point score of his career. Adding to the significance of the out, it also marked the swan song for POA Fully Locked & Loaded who retired following the trip. Throughout his career, the Dittmann Bucking Bulls’ bovine athlete was ridden just 9 times in 54 outs. Woodall concluded the year No. 7 in the national standings, after beginning the event No. 9 in Australia, his second consecutive year-end Top-10 ranking. Throughout 2021. Woodall went a career-best 7-for-18 in Australian competition, covering 38.89% of his draws. Eager to continue his success as he seeks his career-first PBR Australia Championship in 2022, Woodall has drawn Meet Ya Maker in Round 1 of competition inside the Great Western Hotel, and Mob Law as his Round 2 opponent.

FOCUSED FIELDER READIES FOR SEASON DEBUT – In 2021, for the third time in as many years, Clermont standout Brady Fielder was narrowly bested by his fellow Queensland native Aaron Kleier for the PBR Australia Championship. In 2021, however, it was the closest Fielder had come to earning his first national title, concluding the year second to No. 1 Kleier by a mere 248.01 points. Despite falling just short of the top ranking, Fielder concluded the year with a runner-up finish at the prestigious PBR Australia Grand Finals. After covering Meet Ya Maker for 85 points in Round 1, Fielder concluded the year with two qualified rides to rebound from buckoffs in Round 3 and Round 4. Fielder first righted himself in Round 4 when he covered Gangatino for 85.25 points, and then capped the event with and 89.75-point effort aboard Black Tuxedo. Throughout the year, Fielder when 15-for-32 (46.87%), registering a collective 10 Top 10 finishes. Eager to begin the 2022 season on a strong note, Fielder has drawn Rifleman in Round 1 and a rematch in Ariat’s Ol’ Son for Round 2 of the PBR Rockhampton Invitational.

SHEPHARD SETS SIGHTS ON FIRST AUSTRALIAN TITLE – While Kurt Shephard may be a now decade veteran of the PBR, one honor has eluded him – that of PBR Australia Champion. In 2021, however, Shephard got within striking distance of capturing his first national title, finishing a career-best No. 3 in the national standings for the second consecutive season. His year included two event wins, along with an accompanying nine Top 10 finishes, including a seventh-place result at the 2021 PBR Australia Monster Energy Tour Grand Finals. Shephard went a torrid 16-for-31 throughout the campaign. Covering 51.61% of his bovine athlete opponents, Shephard had the second-best riding percentage in PBR Australia throughout 2021, trailing only Aaron Kleier. As the 2022 season gets underway in Rockhampton, Shephard is poised to face Maverick’s Quicksilver in Round 1 and Night Fury in Round 2.

FAMILIAR WATERS – While Round 1 of the season-launch 2022 PBR Australia Monster Energy Tour Rockhampton Invitational will not feature any familiar showdowns, five rematches will headline Round 2, including a rubber match between Brady Fielder and Ariat’s Ol’ Son. The two athlete first went head-to-head in 2020 during the championship round of the Monster Energy Tour event in Airlie Beach. Despite a valiant effort by Fielder, Ariat’s Ol’ Son emerged the dominant athlete, sending him to the ground in 4.31 seconds. In 2021, however, their rivalry was renewed at the Great Western Hotel in Rockhampton. Fielder avenged his buckoff from the previous season, reaching the requisite 8 for 86 points. Beau Willis and Michael Smith have also drawn bulls they have been aboard multiple times prior, however both will be seeking their first qualified ride. Willis faced off twice against Iron Man in 2021. After the bull bested Willis in 2.32 seconds in Rockhampton, Iron Man again made quick work of him in Mackay, that time sending him to the ground in 3.23 seconds. For Smith, his rivalry with Roam Aviation High Risk dates to 2020. Roam Aviation High Risk first bucked off Smith in Caboolture in 4.95 seconds, only to get the better of him in a quicker 2.38 seconds later that year in Beaudesert.

The remaining Round 2 rematches are:

PAST ROCKHAMPTON EVENT WINNERS – One of the longest tenured events in PBR Australia history, since the Queensland city welcomed the league for the first time in 2006, PBR has held a total of 30 events in Rockhampton, including seven tour stops throughout the 2021 campaign. The complete list of past winners is as follows:

BULL PEN – This weekend, as the 2022 PBR Australia season gets underway in Rockhampton, Queensland, all eyes will be on Peter Wallace’s bovine athlete standout Pretty Boy. Roughly one month ago, the commanding bull delivered a performance that won’t soon be forgotten at the 2021 PBR Australia Monster Energy Grand Tour Finals. Bucking twice, out in both Round 2 and the championship round, Pretty Boy was marked 45 points or more in both trips. His performance inside the Townsville Entertainment & Convention Center began in Round 2 when he dispatched Lachlan Richardson in a quick 4.15 seconds to earn a 45-point bull score. Only improving, Pretty Boy returned to the lineup in the championship round when he was drawn by Jake Curr. Pretty Boy went on to deliver the top marked effort of his career, sending the Queensland cowboy to the ground in 4.62 seconds to earn a 45.25-point score. As a result of his efforts, Pretty Boy earned the PBR Australia Bull of the Grand Finals award.

In Rockhampton, Pretty Boy will be joined by eight other athletes from Peter Wallace. Joining Pretty Boy in Round 2 are Slick 60, Seven Eleven, Cursor and Iron Man, while Alcatraz and Bluey Brown are out in Round 1. Holy Poly and Mickey Mouse complete the contingent, both travelling to Rockhampton as re-rides.

NEXT UP – Following a one-month break, the 2022 PBR Australia season will continue on Saturday, February 5 in Scone, New South Wales, at the White Park Equine Arena. Action for the Monster Energy Tour’s Scone Invitational will get underway at 7:00 p.m. AEST.