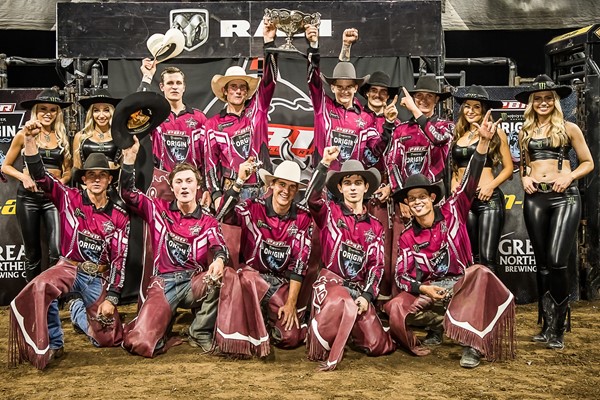 Once inside Brisbane Entertainment Centre, however, Team Queensland was a contingent on a mission, never once surrendering the lead en route to their third consecutive PBR Origin title.

As the very next rider to compete for Team Queensland, Ben Moran (Yeppoon, Queensland) expanded the state’s lead when he converted aboard A Force (ST Bucking Bulls) for 81.5 points.

Qynn Andersen (Koumala, Queensland) was the next contender to reach the requisite 8, expanding Team Queensland’s lead to 247-0 when he outlasted Titanium (Ruhland Ranch Bucking Bulls) for 82.5 points.

As a result of their success, Team Queensland held a 163.5-point lead entering Round 2.

During the second round of competition, the event’s bovine athletes dominated, surrendering just one qualified ride.

Andersen was the lone rider to experience success, riding Comeback Kid (Dittmann Bucking Bulls) for 86 points, growing Team Queensland’s lead to 249.5 points ahead of the bonus round.

After both Nock and Slade bucked off for Team New South Wales, Team Queensland had the victory clinched as Kleier readied to attempt The Pet (ST Bucking Bulls).

Kleier went on to further cement the win with an event-best 87.5-point score, while Andersen, as the last man to compete, punctuated the Maroons’ victory with an 87-point ride atop Big Buck Hunter (ST Bucking Bulls).

When the dust settled, the final scoreboard read 590-165.5, with Team Queensland winning PBR Origin III – Brisbane by 424.5 points. Team Queensland has now won each iteration of the PBR Origin series since it was launched in 2019.

With crucial national points also on the line, Team Queensland’s Andersen finished atop the podium, collecting 72.5 national points as the only rider to go a perfect 3-for-3. As a result of the golden individual finish, Andersen climbed from No. 4 to No. 2 in the national standings. He now trails No. 1 Cody Heffernan (Singleton, New South Wales), by a mere 6.5 national points.

Going a combined 7-for-9 across the three stops of the 2022 PBR Origin series, Andersen also earned the $20,000 series bonus.

In the bull pen, Cattle King Boogers Beach (Dittmann Bucking Bulls) was the supreme animal athlete. He was awarded an event-best 44.5-point score in the bonus round when he bucked off Slade in 2.71 seconds.

The 2022 PBR Australia season will continue Saturday, May 28 for PBR Cooyar Touring Pro Division event in Cooyar, Queensland. Action will get underway at 7:00 p.m. AEDT.