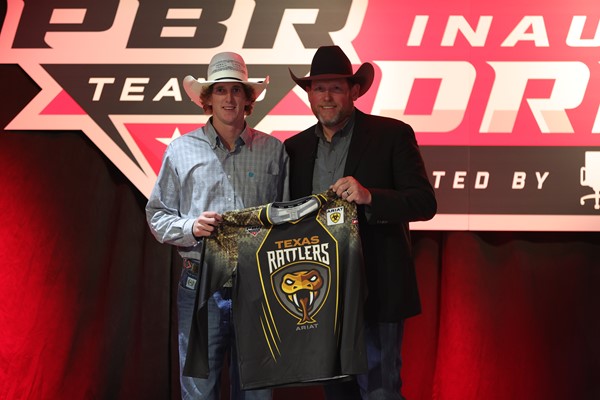 Fielder was drafted on the spurs of qualifying for his second career PBR World Finals.

During the 2022 regular season, the 22-year-old notably recorded his first 90-point ride on the premier series, marked 90.5 points atop The Punisher (Jeb Fredericks/Dakota Rodeo/Chad Berger) in early April in Everett, Washington. Fielder then went on to record the high-marked ride of his career during Round 7 of the 2022 PBR World Finals when he covered World Champion Bull contender Pookie Holler (Dakota Rodeo/Brian & Ashley Pintar/Clay Struve/Chad Berger) for a monstrous 91 points.

Logging consecutive event wins on home soil before travelling to the United States, Fielder registered two Top-5 finishes on the premier series before capping the season with a 20th-place effort at the World Finals.

Among eight teams, the Ariat Texas Rattlers had the third pick in the first round of the draft for the new bull riding league that begins competition in late July.

While the Rattlers initially drafted 2022 PBR World Champion Daylon Swearingen (Piffard, New York) and Mason Taylor (Maypearl, Texas) with their first two picks, they traded with the Carolina Cowboys for Vieira and Jesus, along with swapping draft picks in the third and fourth rounds of the Draft.

“This is everything that we wanted and more,” said Ariat Texas Rattlers General Manager Mark George.  “We always wanted Joao Ricardo Vieira, but we felt like if we could make a move for Daylon and trade for what we wanted, we had to go for it. And this is just a celebration for us because we are sitting pretty.”

“I am really excited about the Draft and the team we have,” said Ariat Texas Rattlers Head Coach Cody Lambert. “Seeing how good all the teams are really is impressive; this is going to be fun and good to watch. I would be very happy with Daylon on my team, but I was really excited for where he went, because he wanted to be on Jerome’s team, and Jerome wanted him, and with us having the third pick in the draft we really held the keys to that. I wanted Joao, and I didn’t know if it would work out, and then we get Cody Jesus who I didn’t think I could possibly get and so that was unbelievable for me. I am proud of the team we got together. We got Joao and we got young guys and guys just coming into the best part of their career like Brady Oleson; I expect huge things from him, and everyone else on the team.”

In 2022, Vieira nearly claimed his first PBR World Championship. However he fell just short of the gold buckle, concluding the season No. 3 in the world.

Vieira’s campaign, which nearly concluded with him becoming the oldest PBR World Champion in history, included three event wins, and a victory in the 15/15 Bucking Battle, along with six 90-point rides.

2022 PBR Team Series Draft was held at Texas Live! in Arlington, Texas, a day after the 2022 PBR World Finals: Unleash The Beast concluded at Dickies Arena in nearby Fort Worth.

All PBR riders in good standing with the league were eligible for the 2022 PBR Team Series Draft as long as they declared by May 6, 2022. Riders who declared for fewer than 10 events are eligible for a two-round supplemental draft on June 2.

When they begin their 10-event regular season, culminating in a Teams Championship in Las Vegas November 4-6, teams will have ten riders in total, including 7 “Protected Roster” riders and 3 “Practice Squad” developmental riders.

The bull riding games that make up the 11-event season will feature five-on-five, head-to-head competition between two teams. Each regular season event day will feature all teams in a game.

The inaugural draft order was determined by a lottery held on Jan. 7 in New York City when the Ariat Texas Rattlers were awarded the third pick.

Prior to the lottery draw, the PBR issued Draft guidelines which specified the two PBR-owned teams (Carolina Cowboys and Oklahoma Freedom) would select in the last two positions in the draft order, and, further, that the draft would be conducted in a “snake” format in which the first team to select in Round 1 would receive the last pick in Round 2 (i.e., Pick 16), the first pick in Round 3 (i.e., Pick 17), and so forth.

The Ariat Texas Rattlers will host its inaugural homestand on Oct. 7-9 at Dickies Arena.

Tickets for the three-day event are on-sale now, and start at $20, taxes and fees not included. Tickets can be purchased online at Ticketmaster.com and PBR.com, at the Dickies Arena Box Office, or by calling PBR customer service at 1-800-732-1727.