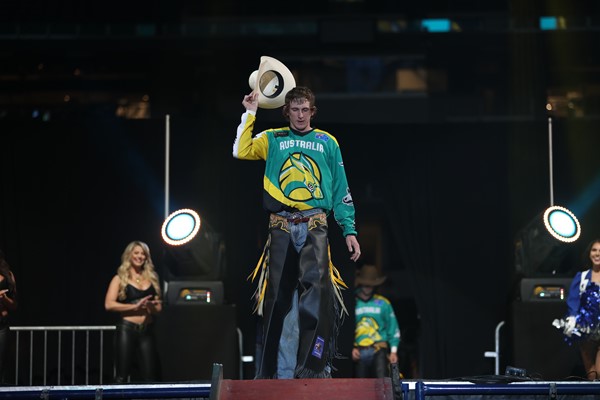 The fifth edition of the PBR Global Cup, the only nation vs. nation bull riding competition, will make its third stop at AT&T Stadium in Arlington, Texas on March 5, 2022. The team tournament debuted in Edmonton, Alberta, in November 2017, visited Sydney, Australia, in June 2018, and made subsequent stops in Arlington in February 2019 and 2020.

The 2022 PBR Global Cup USA will feature six teams representing Australia, Brasil, Canada, Mexico, and the United States. For their home-nation advantage, the USA delegation will field two squads via the Eagles and all Native American Wolves.

At the 2022 PBR Global Cup USA, each team will be comprised of five competing riders, all selected by the nation’s coach.

Woodall will fill the vacant position on the team.

When Woodall last competed, he sustained a lacerated liver after bucking off Not Today in 3.33 seconds in Sacramento, California in late January. Woodall will return for this weekend’s event inside AT&T Stadium, poised to make his Global Cup debut.

On the spurs of winning the 2021 PBR Australia Grand Finals, Woodall brough his talents stateside. In late January, Woodall made his Unleash The Beast debut in Duluth, Georgia, the very weekend before he sustained his near season-ending injury in California.

Both 2016 PBR Australia Champion Cody Heffernan (Singleton, New South Wales, Australia) and Callum Miller (Warwick, Queensland, Australia) are unable to compete due to travel issues and were replaced by Curr and Parkinson, respectively.

Poised to make his PBR Global Cup debut, this weekend’s event will mark Curr’s first time competing on American soil since 2018 when he rode at the Touring Pro Division event in Belton, Texas. After finishing fifth at the 2021 PBR Australia Grand Finals, Curr has competed just once in 2022, going 1-for-2 to finish fourth at the early February event in Scone, New South Wales.

On March 5, not only will Parkinson make his PBR Global Cup debut, but he will also be riding for the first time in 2022 and the first time outside of Australia.

Parkinson last competed in May 2021 in Rockhampton, Queensland. Throughout his career, 20-year-old Parkinson has ridden at four PBR events, finishing a career-best eighth in Marrabel in 2020.

The additional roster changes are:

Along with roster changes, the PBR today announced those riders who will be team captains.

For the third time in his career, Fielder will ride for Team Australia.

Having spent most of his 2022 season to date on home soil, Fielder made the journey to the United States ranked No. 1 in the race for the 2022 PBR Australia Championship having won back-to-back Monster Energy Tour events in Scone, New South Wales, and Rockhampton, Queensland. Getting a jump-start on American competition, Fielder travelled to the United States early, riding last weekend on the Unleash The Beast in North Little Rock, Arkansas, where he went 0-for-2.

Those remaining riders are:

The one-day event will feature two rounds of competition, where three riders from each team will attempt one bull. Throughout those rounds, every rider from each team must attempt a minimum of one bull. Following the initial rounds, each team will select one rider to attempt the nation’s final bull in the bonus round. The 2022 PBR Global Cup USA Champion will be the team with the top combined score through their seven outs.

Action for the 2022 PBR Global Cup USA, presented by Monster Energy, gets underway on Saturday, March 5 at 5:45 p.m. CST in Arlington, Texas, at AT&T Stadium.

Adding to the unprecedented weekend, via a landmark partnership between PBR and Teton Ridge, following the 2022 PBR Global Cup USA, presented by Monster Energy, The American Rodeo will take over the home of the NFL’s Dallas Cowboys on Sunday, March 6 starting at 12:00 p.m. CST.

Tickets for both events are on sale now and can be purchased at ATTStadium.com or SeatGeek.com. Tickets for both events start at just $20, taxes and fees not included. While individual event tickets are available for purchase at varying price levels, fans can save up to 20% by purchasing weekend combo packages to experience both Saturday and Sunday.

For fans wanting to make this one-of-a-kind weekend even more memorable, VIP tickets are available for both the 2022 PBR Global Cup USA, presented by Monster Energy, and The American Rodeo. Guests can enjoy premium seating closest to the action, question-and-answer presentations, behind-the-scenes-tours and much more. For more information or to purchase VIP tickets and premium experiences, eventgoers can visit SeatGeek.com.