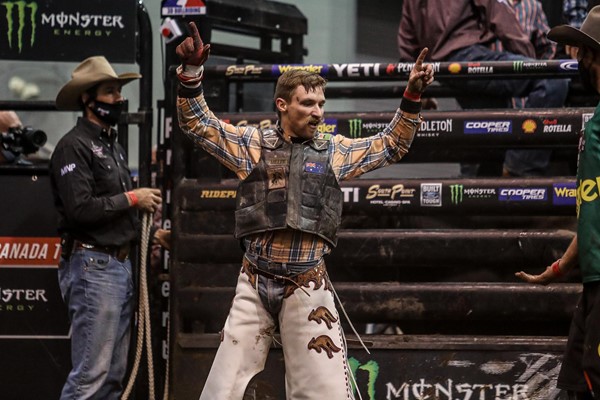 Callum Miller is now ranked No. 8 in the race for the 2022 PBR Canada Championship. Photo: Covy Moore/CovyMoore.com.

Miller delivered his score in the opening round of competition. Dominating Barnyard (Eno Bucking Bulls), the newly signed Bass Pro Shops Missouri Thunder rider made the 8 for 80.5 points.

While he was bested in the championship round by Howlin Wolf (Flying Four Bucking Bulls), Miller’s Round 1 effort was enough to earn him a Top-10 finish.

For their efforts, Miller and Gloria both netted 2 national points.

Attempting to become the first Australia PBR Canada Champion in history, Miller is now ranked No. 8 in the national standings, 34 points behind the top spot, while Gloria is No. 6, 22 points removed from the No. 1 rank.

As the only rider to go a perfect 2-for-2, Smith won the Eagle Creek GM PBR Classic, catapulting him to the No. 1 rank in the race for the 2022 PBR Canada Championship and accompanying $50,000 bonus.

The newly minted Austin Gamblers contender first put points on the board in Round 1 when he covered Hanna Motors Rhythm & Blues (Skori Bucking Bulls) for 80 points.

Tied for seventh on the event leaderboard entering the championship round, Smith next readied to attempt Look Alive (Flying Four Bucking Bulls). In full control, Smith made the requisite 8 for 77 points, clinching the event win.

The victory is the second of Smith’s young career, first capturing the win at the 2022season-launch Touring Pro Division stop in Lloydminster, Saskatchewan.

The 20-year-old’s latest golden finish earned him a critical 25 national points, elevating Smith from No. 4 to No. 1 in the national standings. Smith now leads No. 2 Coy Robbins (Camrose, Alberta) by 12.5 points.

While Robbins slipped to No. 2 in the standings, he remained within striking distance of the top position after he tied for fourth at the Meadow Lake Stampede Grounds.

Robbins posted his lone score of the event in the opening round of competition, riding Thor’s Hammer (Wild Hoggs Bucking Bulls) for 81 points, collecting 6 national points.

Smeltzer is now tied for the No. 3 rank in the Canadian national standings, 18 points behind No. 1 Smith.

Returning to the top of the leaderboard, 2020 PBR Canada Champion Dakota Buttar (Kindersley, Saskatchewan) parlayed a Round 1 win into a runner-up finish overall.

Buttar delivered the highest-scored ride of the evening when he reached the whistle aboard Finning JB Muley (Flying Four Bucking Bulls) for 84 points.

Leaving Meadow Lake having earned 17 national points, Buttar rose seven positions in the national standings, climbing from No. 12 to No. 5. Attempting to become just the fourth multi-time PBR Canada Champion in history in 2022, Buttar trails the top position by a slim 21 points.

In the bull pen, Time Well Spent (Thompson Rodeo Livestock) bucked supreme. Capturing the Bull of the Event honor, Time Well Spent was marked 45 points in the championship round for his 2.53-second trip with Tanner Skene (Prince Albert, Saskatchewan).