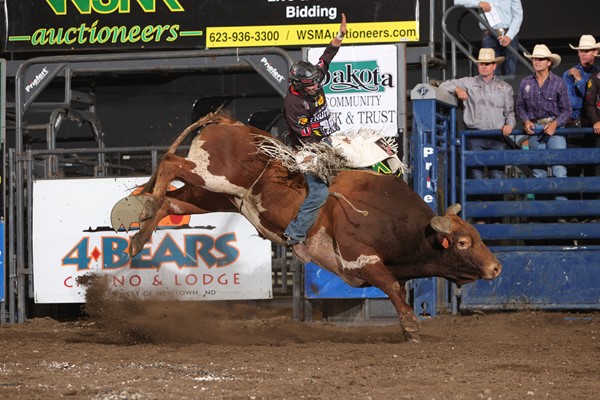 TRYON, N.C. – Ahead of the opening night of games for the PBR (Professional Bull Riders) Team Series second 2022 preseason event in Tryon, North Carolina on June 24-25, the starting lineups have been announced for each of the eight competing teams.

When the preseason continues in Tryon, North Carolina, the game matchups for Friday, June 24 are:

After making a splash for the Thunder at the opening preseason event in Bismarck, North Dakota, Aussie sensation Callum Miller (Warwick, Queensland) will return to the lineup for the Missouri team in their game against the Austin Gamblers. He will match up with Church Bells.

In Bismarck, as the Thunder faced off against the Cowboys, after Miller covered his bull, the Australian sensation was tapped to represent the Missouri Thunder in the bonus round. Matched with Two Socks (Dakota Rodeo/Mark Baker/Clay Struve/Chad Berger), Miller matched the animal athlete jump-for-jump en route to an 89.25-point score, the second-best of the Bonus Round.

The PBR Team Series revolutionizes the sport of bull riding, as riders compete via teams for a national championship to be awarded in November in Las Vegas. The league is comprised of eight founding teams: the Arizona Ridge Riders, Austin Gamblers, Kansas City Outlaws, Missouri Thunder, Nashville Stampede, Oklahoma Freedom, Texas Rattlers and the Carolina’s own Carolina Cowboys.

During the preseason event in Tryon, each of the eight founding teams for the PBR Team Series are competing in a head-to-head, five-on-five bull riding game each day of competition. The team with the highest aggregate score will be the game winner, and ties will be allowed. Following the team’s initial game on Friday, the same process will be repeated on the second night of competition, with each team facing a new opponent. While the rosters have been set for their first game on June 24, teams have the ability to change their roster on the second day of action.

Following the second round of games, the final day of the preseason event will feature a Bonus Round with each team selecting one rider attempting one more bull. This rider does not have to be one of the five riders who competed earlier in his team’s respective games and instead can be an alternate (bench) rider. The Bonus Round is independent of the results of that weekend’s previous games and only applies to the overall event standings in the case of a tie. Teams receive bonus points based on their rider’s placement in the Bonus Round: 1st (8 points), 2nd (7 points), 3rd (6 points), 4th (5 points), 5th (4 points), 6th (3 points), 7th (2 points), 8th (1 point). Teams will be placed via ride score and then buckoff time.

The starting lineups for the opening round of games in Tryon are:

As the preseason event continues Saturday, June 25, the game matchups are:

Stay tuned to PBR.com/teams for the latest event results, roster updates and more.