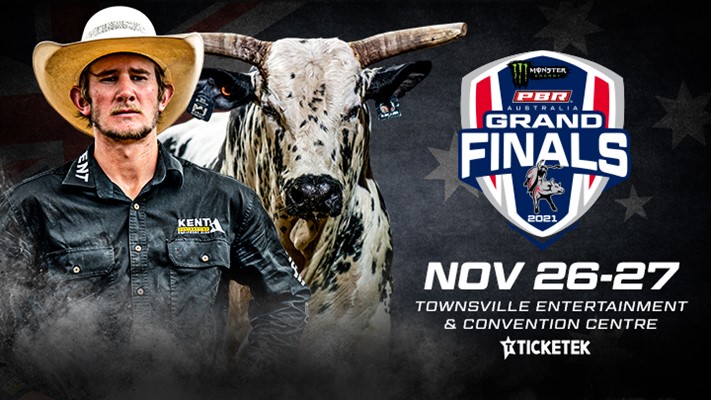 Season long, riders will have had the opportunity to compete across Australia at more than 15 Back to the Heartland Series events, spanning the Monster Energy Tour, Origins events and Touring Pro Division, to earn points towards the Australian National Standings, all in an effort to be the No.1-ranked cowboy at year’s end and earn the coveted PBR Australia title.

“Townsville is a city that knows how to support events like PBR. We don’t just show up, we come dressed to the hilt and ready to have a great time,” Cr Jenny Hill, Mayor of Townsville said. “As the events capital of Northern Australia, Townsville is proud to be able to host the PBR Australia Grand Finals for the fourth year in a row, showing just how dedicated our city is to presenting world-class events.”

“We’ve had a stellar sports calendar in Townsville this, with State of Origin Round One and Oceania Rugby Sevens being played at Queensland Country Bank Stadium, along with the Supercars Townsville 500 at Reid Park and Magnetic Island Race Week bringing the best of sailing to North Queensland. Like other cities, our tourism and hospitality sectors have been hit hard by the impact of the pandemic, which is why it’s great to be able to increase visitor stays in Townsville by hosting incredible sporting events like the PBR.”

“It’s the one time of the year we all look forward to after a grueling season and there is no place better city than Townsville to conclude and decide who the year end champions will be,” said Glen Young, General Manager of PBR Australia. “Since we first started this event we have had only one agenda -- create the toughest competition in the country that featured not only the best bucking bulls Australia has to offer, but also showcase the most accomplished bull riding athletes in the one stand-alone competition. Moving forward our aim is to still maintain Townsville as one of our key destination events and continue to develop and grow it into one of the nation’s most signature events.”

In 2019, while Lachlan Richardson (Gresford, New South Wales) rode to victory at the season-culminating event, Keleier once again exited the Townsville Entertainment & Convention Centre as the PBR Australian Champion, defending his national title with a twelfth-place result.

At the most recent iteration of the season-culminating event, Brady Fielder (Clermont, Queensland) went a near perfect 4-for-5 to clinch the PBR Australia Grand Finals victory. However, Kleier delivered a third-place finish in Townsville to capture his historic third consecutive PBR Australia Championship.

Should Kleier once again capture the national title in 2021, he would tie David Kennedy (Kyogle, New South Wales) for most Australian titles won by one rider in league history. A four-time PBR Australia Champion, Kennedy logged his titles in 2009-2010, 2012 and 2014.

Tickets for the 2021 PBR Australia Monster Energy Tour Grand Finals are on sale now, and start at $35. They can be purchased at PBRAustralia.com.au.

Corporate box seats are also available from groups of 8-16 people. Featuring the best seats in the arena, the corporate boxes also include direct food and beverage service throughout the event, and a special PBR gift. For more information, or to purchase a corporate box, email pbra@pbr.com.