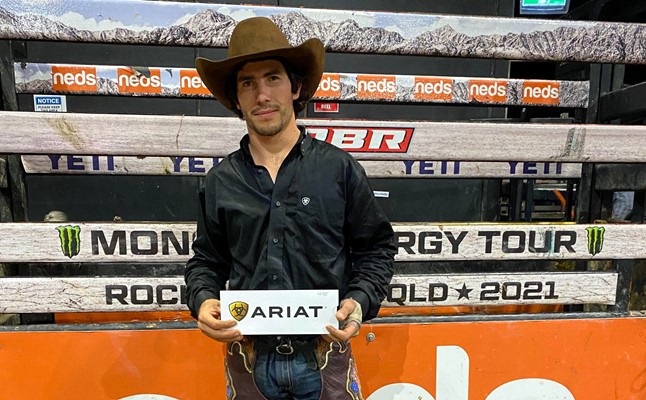 Kurt Shephard is now ranked No. 1 in the race for the 2022 PBR Australia Championship.

ROCKHAMPTON, Qld. – As action for the 2022 PBR (Professional Bull Riders) Australia season got underway on New Years Eve in Rockhampton, Queensland, no rider was more dominant than Kurt Shephard (Mareeba, Queensland). Going a perfect 2-for-2 inside the Great Western Hotel, Shepard won the elite Monster Energy Tour’s PBR Rockhampton Invitational, surging to an early lead in the race for the 2022 PBR Australia Championship.

Shephard got off to a hot start in Round 1, delivering the second-best score when he made the 8 aboard Maverick’s Quicksilver (Blackhall Livestock/Maverick’s Western Wear) for 84.5 points.

The PBR World Finals qualifier then surged to the top of the leaderboard when he became the lone rider to cover both of his bovine athlete opponents. Drawing Night Fury (ST Bucking Bulls) in Round 2, Shephard covered the animal athlete for 82.5 points to clinch the event victory.

For his efforts, Shephard earned 77 points and surged to the No. 1 rank in the national standings. Shephard now leads the No. 2 contender by 22 points.

In Round 1, the 22-year-old registered the top score of the season-launch event when he bested Rifleman (BK Bucking Bulls) for 86 points.

Fielder then faced a rubber match in Round 2, slated to square off against Ariat’s Ol’ Son (Dunner Bulls) for the third time in his career.

The two athletes first went head-to-head in November 2020 during the championship round of the Monster Energy Tour event in Airlie Beach. Despite a valiant effort by Fielder, Ariat’s Ol’ Son emerged the dominant athlete, sending him to the ground in 4.31 seconds. In 2021, however, their rivalry was renewed at the Great Western Hotel in Rockhampton in early October. Fielder avenged his buckoff from the previous season, reaching the requisite 8 for 86 points.

On an evening of competition where the bulls dominated, Kelsey Pavlou (Toora, Victoria) was the only other contender to deliver a qualified ride.

Rebounding from a 1.93-second buckoff dealt to him by Alcatraz (Pete Wallace) in Round 1, Pavlou earned his third-place finish courtesy of his Round 2, 80.5-point score on The Pet (ST Bucking Bulls).

Pavlou’s Top 5 finish earned him 42 national points. He is now No. 3 in the national standings, 35 points behind No. 1 Shephard.

In the bull pen, Pretty Boy (Peter Wallace) was unrivaled.

Fresh off his 45-point-plus, two-out performance at the PBR Australia Grand Finals which earned him the Bull of the Event honor at the year-end tour stop, the Peter Wallace standout again led the pack.