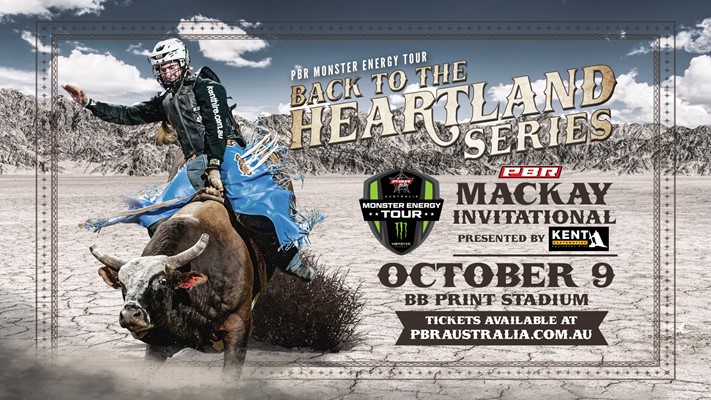 MACKAY, Qld – For the eighth consecutive season, PBR (Professional Bull Riders) Australia will buck into Mackay, Queensland, travelling to BB Print Stadium Oct. 9 with the fan-attended Monster Energy Tour Mackay Invitational, presented by Kent Hire, part of the 2021 Back to the Heartland Series.

The Back to the Heartland Series will be held throughout 2021, travelling to iconic western sports venues and locales throughout Australia that have impacted and help shape the western lifestyle in the nation.

PBR Australia’s Monster Energy Tour regularly features the nation’s best riders squaring off against the rankest bucking bulls from across Australia. Fans will witness exhilarating 8-second rides and wrecks throughout the action-packed event as the PBR’s courageous bull-riding athletes attempt to conquer their 900-kilogram opponents.

The PBR Mackay Invitational, presented by Kent Hire, will abide by a series of health standards and protocols guided by the Queensland state government industry framework for safe events during COVID-19 (coronavirus).

In 2020, Mackay was one of seven cities that welcomed the league for a regular-season double-header tour stop following the onset of the COVID-19 pandemic.

At the opening iteration of the Mackay Invitational in 2020, Lane Mellers (Mundubbera, Queensland) captured his career first event victory on home soil courtesy of a perfect 2-for-2 performance.

As one of just two riders to cover both of his draws, the then 21-year-old began the event with an 81-point effort aboard Cattle King Ray Ban (Dittman Bucking Bulls) in Round 1. Continuing the momentum in the championship round, Mellers punctuated his flawless performance with an 83-point trip atop Freckles Brown (Peter Wallace).

Fresh off a fifth-place result in the opening edition of the double-header, Shephard tied for third in Round 1 when he made the 8 aboard 25 to Life (Dunne Bulls) for 82 points. Remaining red-hot, Shephard rose to the top of the event leaderboard when he won the championship round courtesy of an 85.5-point ride on Black Tuxedo (Peter Wallace).

The 2020 PBR Mackay Invitational double-header was part of one of the most fiercely contended races for the Australian Championship in PBR history last season..

Seeking history in 2021, should Kleier win the national title a historic fourth consecutive time he would also tie David Kennedy (Kyogle, New South Wales) for most Australian national titles won by one rider in league history. Kennedy topped the national standings in 2009-2010, 2012 and 2014.

With four events already complete thus far, Kleier has put himself in a strong position to further etch his name in the league record books, currently No. 1 in the 2021 national standings.

Kleier notably won the season-launch event in Rockhampton via a 2-for-2 showing, including the first 90-point ride of the season, marked 90.5 points on Black Tuxedo (Peter Wallace) to cement the victory.

Macaulie Leather (Calliope, Queensland), who is also the top-ranked Rookie of the Year contender, put the Australian bull riding world on notice when he made his league debut in May at the Rockhampton Invitational.

After finishing fourth at the season-launch event, Leather captured his career-first victory at the second event of the year, also held in Rockhampton.

While Leather briefly held the No. 1 ranking in the nation, the 20-year-old, who delivered back-to-back Top-10 finishes at the most recent event, is now second to Kleier by a mere 19.5 points.

The bull riding action for the 2021 PBR Mackay Invitational, presented by Kent Hire, begins at 7:00 p.m. AEST on Saturday, October 9 at BB Print Stadium. After all competing riders attempt one bull each in Round 1, the Top 10 will then advance to the championship round for one more out and a chance at the event title. In addition to competing for points towards the Australian national standings, riders will also vie for crucial points towards the World Finals Nov. 3-7 in Las Vegas.

Tickets for the PBR Australia Monster Energy Tour’s Mackay Invitational, presented by Kent Hire, are on sale now for $35, taxes and fees not included, and can be purchased at PBRAustralia.com.au.