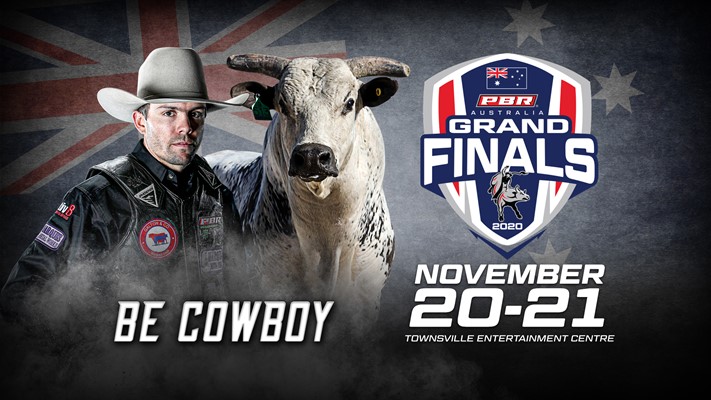 Tickets for the two-day, season-culminating event on sale Wednesday, September 30 at midday

TOWNSVILLE, Queensland – For the third consecutive year, PBR (Professional Bull Riders) Australia will return to Townsville, Queensland and the Townsville Entertainment Centre for the elite Monster Energy Tour’s Grand Finals on November 20-21 when the 2020 PBR Australia Champion will be crowned.

Season long, riders will have had the opportunity to compete at 19 Monster Energy Tour and Touring Pro Division events across Australia to earn points towards the Australian National Standings, all in an effort to be the No.1-ranked cowboy at year’s end and earn the coveted PBR Australia title.

The 2020 PBR Australia Grand Finals will abide by a series of health standards and protocols as approved by Queensland Health, including:

The 2020 PBR Australia Monster Energy Tour Grand Finals will mark the third consecutive season the event has been held in Townsville.

“Townsville is the events capital of Northern Australia. We are in the perfect position to host some of the most exciting sporting events in the country this year, including a Supercars double header, the Horn v Tszyu fight, and now the PBR Grand Finals,” Cr Jenny Hill, Mayor of Townsville said. “For our hospitality and tourism industries, the PBR Grand Finals are more than just the event. It’s about visitors staying in hotels, going out for meals at our great restaurants and cafes, and visiting our beautiful local attractions.”

“As with all of our sporting and cultural events, staying COVID-safe is a focus for us here in Townsville. The PBR Grand Finals will be a COVID-safe event, and I ask everyone visiting Townsville for the event to practice responsible behavior and good hygiene while enjoying our city.”

“PBR Australia has worked relentlessly to return to competition safely and responsibly during these challenging times,” said Glen Young, General Manager of PBR Australia.  ”We are now overjoyed to announce that our 2020 season will come to a conclusion in Townsville, with the city’s Townsville Event Centre welcoming our Grand Finals for the third consecutive season, a venue known for its unparalleled, up-close experience that has been the home to many of the nation’s most historic rides. We couldn’t think of a more apt city to hold the Grand Finals, which will conclude a season of action unlike no other in front of one of our most enthusiastic fan bases.”

The next season, while Lachlan Richardson (Gresford, New South Wales) rode to victory at the season-culminating event, Keleier once again exited the Townsville Event Centre as the PBR Australian Champion, defending his national title with a twelfth-place result.

This season, PBR Australia had held five events, when the sport was shut down in mid-March due to COVID-19 restrictions. The sport resumed competition on September 26 in Caboolture, Queensland, following a 203-day hiatus.

Thus far in 2020, the dominant athlete has been current No. 1 Richardson, currently with an 85.5-point lead atop the PBR Australia national standings.

Richardson, who is seeking his first PBR Australia Championship, has won one event, topping the field in Ballarat, Victoria, while also logging three additional Top-10 efforts to date in 2020.

Richardson’s top competitor is No. 2 Kleier, the two-time and defending PBR Australia Champion.

Kleier’s season has been headlined by three Top-5 efforts logged consecutively at the start of the 2020 campaign. Beginning the year with a fourth-place finish at the Tamworth Iron Cowboy, the 22-year-old followed that with a second-place result at the Melbourne Invitational and third-place finish at the Great Western New Years Eve PBR in Rockhampton, Queensland.

All future PBR Australia events are subject to change, planned in accordance with directives issued by relevant government and health authorities given the evolving regulations during the COVID-19 (coronavirus) pandemic

PBR (Professional Bull Riders), which has events in five countries, has competed in Australia since 2005, where it operates two tours, producing approximately 20 events annually, visiting cities such as Sydney, Brisbane, and Townsville as well as regional Victoria and New South Wales. For more information on PBR Australia, go to www.pbraustralia.com.au or follow on Facebook at Facebook.com/pbraustralia and Instagram at Instagram.com/pbraustralia.