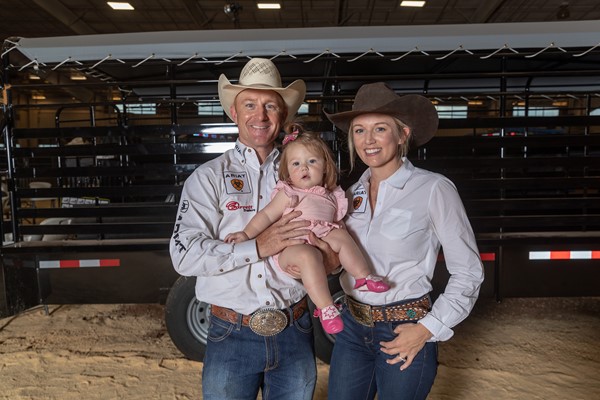 Emerging Australian bucking bull producer MJ Bucking Bulls is proud to announce the formation of a genetics partnership with Oklahoma based McCoy Ranch.

"I am really excited to have the opportunity to build a relationship with a well-established and successful program in America," said Mitch James, CEO of MJ Bucking Bulls.

"To join with Cord and Sara McCoy and cement the MJ Bucking Bulls breeding program in the industry stronghold of Oklahoma with one of the most prominent players in the game is a dream come true," he added.

James is no stranger the American bucking bull market having imported genetics across the Pacific and into Australia over the past few years. But after purchasing breeding stock on the ground in the USA early in 2019, James needed someone to take care of his valuable commodities.

"We were put in contact with McCoy Ranch by Jared Farley, and I could not think of a more knowledgeable partner to partner with and learn from."

"Cord and Sara's enthusiasm and passion for the industry is up there with the best in the world, and that is an attitude that I am proud to align MJ Bucking Bulls with," said James.

The McCoy family are true all-rounders in the bucking bull business. The strength of their breeding and training programs has been showcased at the industry's most significant events over the past 18 months.

At the ABBI World Finals in Las Vegas last November, Ridin Solo took out the 2018 ABBI Futurity World Championship and continues to develop into a very impressive rider bull, amassing over $175,000 in prize money during his short career.

Top-15 finisher in the 2018 ABBI Classic Competition Mr Majestic has gone on to become a PBR Championship Round Regular. Viper, who defeated some of the most explosive young bucking bulls in America to win the ABBI Classic Wildcard event as a three-year-old, sits thirteenth in the 2019 ABBI Classic Standings.

Promising three-year-old bull Vanished sits in a strong position in the 2019 ABBI Derby Competition, and the McCoy’s also have an outstanding crop of futurity calves and yearlings ready to compete in Las Vegas later this year at the 2019 ABBI World Finals.

Cord McCoy says he is also very optimistic about the prospects of the partnership.

"We only got introduced to Mitch and MJ Bucking Bulls earlier this year," he said. "But I feel like we have hit the ground running making the bucking bull business stronger in America and Australia."

"We already have a good set of embryos in the tank, and we plan to put them in cows early in spring next year."

"I am pretty excited about the moves we are making together," McCoy added.

James will travel to Las Vegas next month to attend the 2019 PBR and ABBI World Finals where he plans to spend time with McCoy with an aim to learn more about the bucking bull business and the genetics export process. They will also discuss ways to take the McCoy Ranch and MJ Bucking Bulls partnership to the next level.