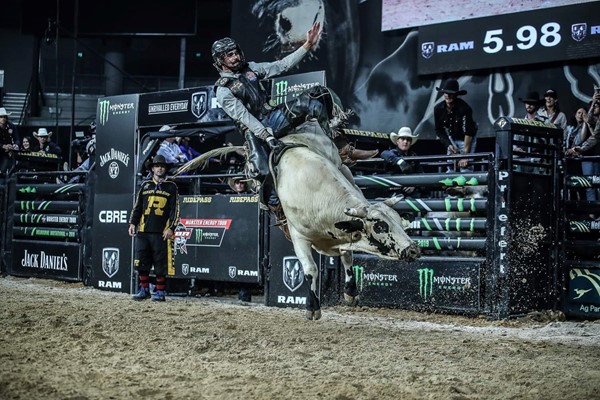 Coming off an injury-affected 2019 season where he covered just 11 bulls from 26 events, resulting in his lowest career riding percentage of 26.17%, the Coonamble bull rider responded to the murmurs of his critics with an error-free showing.

He rode all three of his bulls inside a rowdy Melbourne Arena to not only claim the buckle but also move to No. 1 in the 2020 PBR Australian National Standings.

“2019 was a long year with injuries, and a few people thought I was done and wasn’t going to ride any good anymore,” Burtenshaw told RidePass sideline eye, Will McCloy.

In Round 1, Burtenshaw gritted out an 80-point effort into his hand aboard Big or Bust (Morgys Cattle Company) to get his night started. He then carried that momentum through to the second round where he dominated Train Wreck (Throsby & Russell Bucking Bulls) in the same direction for a further 84.5 points.

With two of PBR Australia’s heavy hitters, Aaron Kleier and Lachlan Richardson breathing down his neck heading into the Championship Round, Burtenshaw was aware that he would need to make the whistle to claim the buckle before the round had even begun.

His No. 1 seeding set up a mouth-watering matchup with oOh! Mr Buckmore (Throsby & Russell Bucking Bulls) in the Championship Round. It would be the first time that Burtenshaw would face the short-go regular and after both Kleier and Richardson applied the pressure by riding their last bulls, it was the 25-year-old’s time to shine.

Burtenshaw called for the gate and after a sharp turn to the right, oOh! Mr Buckmore settled into his work with outstanding timing. The pair synced up sensationally for the round win and highest score of the night - 88-points.

“I knew they were going to ride those bulls. I’d seen Lachy had Chemical Weapon, and Aaron had Wild Paint, so I knew I had to ride,” Burtenshaw explained.

“It all worked out.”

The added score moved his aggregate total onto 252.5 points for a dominant win. Burtenshaw picked up 565 Championship Points plus cheques worth a combined $6,937.50.

Finishing in second place was Aaron Kleier, who also finished the night with three scores, resulting in a total of 244.5 points.

Heading into the 2019 edition of the event, the Clermont cowboy had struggled to post scores on the Melbourne dirt, but he rectified the situation to move to second place in the Australian ratings.

Kleier got his night started with a 79.5-point ride aboard Little Moody (Morgys Cattle Company) in Round 1. He then got his revenge in a rematch against Ferdinand (George Hempenstall) to post a second-round score of 81.5 points.

The 21-year-old set up a bout with Wild Paint (Throsby & Russell Bucking Bulls) in the Championship Round and the pair went at it at full pace, around to the left with Kleier emerging with 84.5 points. The qualified ride moved the dual National Champion into the event lead, but Burtenshaw was out to spoil the party.

Kleier collected 300 Championship Points and $4,462.50 in his runner up finish. He sits second in the new-year National Standings.

Lachlan Richardson ended his hot November with a 2-for-3, 172-point night which resulted in a third-place finish.

After bucking off his Round 1 opponent, the 27-year-old rebounded to split the second-round win, thanks to an 85.5 point aboard Gambler (Woodall Rodeo Company).

In the Championship Round, Richardson combined with SweetPro’s Chemical Weapon (Maynes Bucking Bulls) for 86.5 points. The bull and the Gresford bull rider both produced some big moves during the eight-seconds to ensure the judges awarded a score worthy of taking the lead until he was surpassed by the two remaining cowboys who posted scores.

Richardson earned 320 points to push into fifth in the 2020 National Standings and is the early PBR World Number 1. He also took home $3,900.00 in prizemoney.

The 20-year-old opened his account with 81 points aboard Outback Cat (Throsby & Russell Bucking Bulls) in Round 1. He then became the first rider to cover two bulls thanks to an 81.5-point trip on California Gold (Maynes Bucking Bulls) in the early stages of Round 2.

Chocolate Thunder’s (Yates/Hempenstall) sharp left turn proved a bridge too far for Curr in the Championship Round, finishing the event in fourth place with an aggregate total of 162.5 points. He collected 140 points and $1,575.00.

Rohan Markham made his first Monster Energy Tour appearance in over 12 months, and he wound up finishing the best of the riders with one score in fifth place.

The 27-year-old Ravenshoe talent made light work of Wrangler’s Volatile (Maynes Bucking Bulls) in Round 2, emerging with 85.5 points to split the Round 2 win with Richardson.

Tamworth’s Lachlan Slade finished the night in sixth place after he made the most of a re-ride opportunity to cover Red Man (Throsby & Russell Bucking Bulls) for 85 points to take the Round 1 win.

Veteran Ayr bull rider Budd Williamson rounded out the top-10 with 82.5 points aboard Rev It Up (Throsby & Russell Bucking Bulls) in the opening round.

The High Marked Bull of the 2019 Melbourne Invitational was SweetPro’s Mystery for Kasper and Maynes Bucking Bulls who posted an impressive bull score of 43.5 points in his 1.76 second Round 2 matchup with JC Davis.

The 2019 Melbourne Invitational Champion Bull Team event was awarded to Throsby & Russell Bucking Bulls. All three members of their team picked up maximum bonus points with 8-second qualified rides posted. oOh! Mr Buckmore was marked 43 points with Nathan Burtenshaw aboard in the Championship Round. In the final round of the night, Wild Paint was awarded 41 points in his matchup with Aaron Kleier. Silver Lining was scored 40.5 points against rookie Matt Hollis in Round 1.

Fifteen of the twenty-two riders posted a score at the 2019 Melbourne Invitational, making it one of the highest riding percentages we have seen on tour in the past few seasons at 40.38%. That is almost 9% above the 2019 average. The Bulls posted an average score of 40.04 points, which is 0.42 points down on the 2019 average rating.