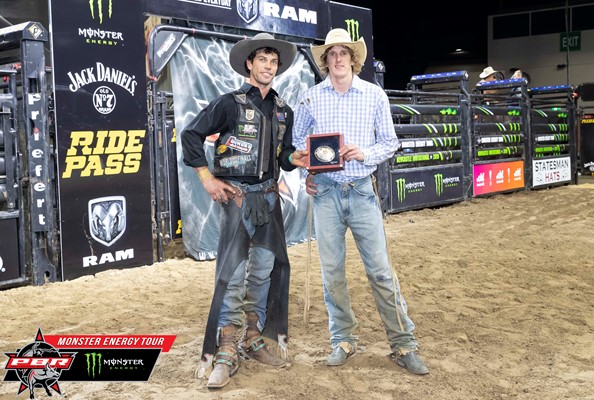 For the third straight year, co-champions were crowned in front of a capacity Newcastle Entertainment Centre crowd. Both cowboys finished the night riding two of their three bulls to share the buckle and the bulk of the $20,000 in prizemoney on offer.

In the opening round, Fielder produced an outstanding qualified ride aboard Shots (Dittmann Bucking Bulls) and was marked 82.5 points to finish second in Round 1. He then bucked off Train Wreck (Throsby & Russell Bucking Bulls) in 7.55 seconds to find himself sharing the sixth spot on the leaderboard after the two long rounds.

Babbington, the 2015 PBR Australia National Champion, opened his account aboard Down Under (John Gill & Sons) for 80.5 points to finish third in Round 1. He then shared the top spot in Round 2 with a brilliant 88-point performance on Russian Roulette (Stuart Timm) to become the man to beat entering the final round.

Fielder produced a qualified ride early in the Championship Round when he took the lead with 86 points. His ride came aboard the previously unridden Black Tuxedo (Wallace Bucking Bulls) to join Babbington in a share of the lead.

The bulls dominated the short round, dispatching the cowboys one by one with Babbington last to ride and in need of an 8-second ride to win the event. It wasn’t to be as the Kiwi bull rider was unable to cover High Flying Akubra (John Gill & Sons). Babbington bucked off in 2.40 seconds to leave the veteran and the rookie locked together on 168.5 points.

It was Fielder’s fifth event victory of 2019, but it was his first career win at the highest level of PBR competition in Australia. He moved into second place in the PBR Australian National Standings and was able to extend his lead in the Rookie of the Year race by collecting 480 points. The 19-year-old also added 130 world points which moved him from 43rd and into 36th spot in the PBR World Standings.

“It feels real good,” Fielder said live on RidePass following the event. “I got two good bulls rode and I was a bit unlucky on my other one that I fell off.”

For Babbington, it was the second time that he has shared the Newcastle Invitational event title after he collected the buckle alongside Kleier in 2017. In what is likely to be his final PBR Australia campaign, the 32-year-old earned 455 points in Newcastle to rocket up the Australian Standings from 39th and into 18th place. He also moved up into the Top-100 on the World Standings after collecting 130 points despite competing at just four events so far this season.

“There is no better feeling than winning,” Babbington told Ride the Rage. “For me, this weekend meant a lot. I have had a good week and a lot of things have fallen my way”.

“My goal is to make a run and qualify for the PBR Australia Grand Finals, and this win had put me in an excellent spot to do that,” he added.

The pair outlasted seven-time PBR World Finals Qualifier Lachlan Richardson (Gresford, NSW), who finished just one point behind with a two-bull total of 167.5 points. Richardson collected 300 points and moved back into fourth place in the 2019 Aussie Standings.

It was a timely performance by Richardson who broke out of a riding slump with an opening-round 79.5 points effort aboard Super Natural (Wallace Bucking Bulls). He then rode Big Buck Hunter (Stuart Timm) for 88 points to split the Round 2 win with Babbington.

2018 PBR Australian National Champion Aaron Kleier (Clermont, QLD) finished the best of the riders to finish the event with one score in fourth place. The No. 1 ranked rider in the country combined with SweetPro’s Mystery (Kasper Bucking Bulls) for 86.5 points in the second round.

Kleier remains atop the PBR Australian National Standings leaderboard following his solid result and opened the gap between himself and all contenders except for Fielder in the race for the Gold Buckle. That gap now sits at 977.5 points.

Rounding out the Top-5 were Lane Mellers (Mundubbera, QLD) and Kurt Shephard (Atherton, QLD) who finished with 85.5 points apiece.

The pair split the placing after Mellers took maximum points from Round 1 with a qualified ride aboard Ransom 2 (John Gill & Sons). Shephard’s score came in Round 2 when he covered POA Ray Ban (Dittmann Bucking Bulls).

Dittmann Bucking Bulls (Bloomsbury, QLD) took home their third Champion Bull Team award of the season. They continue to make up ground on the current No. 1 ranked Throsby & Russell Bucking Bulls (Melville, NSW) in the race to become 2019 Stock Contractors of the Year.

POA Palooka led the way for the Dittmann team once again, awarded the Champion Bull of the Night for his 3.38 second, 44.5-point defeat of Kleier in the Championship Round. It was also the third time that POA Palooka had received the award from his performances at the past four Monster Energy Tour events.

He was supported in the Bull Team event by penmates POA Fully Locked & Loaded and Lock n Load who were marked 43.5 points and 43 points respectively.

PBR Australia’s Monster Energy Tour makes its next stop in Mackay, Queensland on 28 September, but not before the Touring Pro Division bucks at Burnett Heads, Queensland on 17 August. Visit the PBR Australia website for all the details.