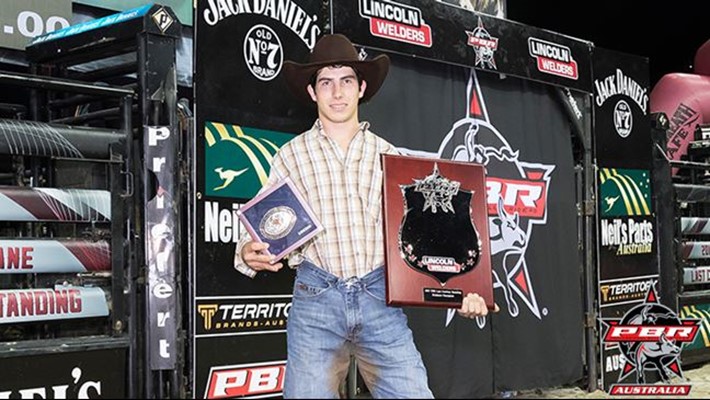 Kurt Shephard's victory at Last Cowboy Standing was his second victory in a row in Australia. Photo: Phillip Wittke

BRISBANE, QLD – Kurt Shephard once again found himself at the top when he claimed the title at PBR Australia’s Last Cowboy Standing event Saturday in Brisbane.

It was the second week in a row that Shephard had claimed a title after winning PBR Australia’s Cairns Invitational the week before.

Shephard advanced through the first two rounds in Brisbane on buckoff time. In the championship round, Shephard rode Big Bucks for 85.25 points to walk off with the win and his second buckle in as many weeks.

Shephard moved up to No. 36 in the world standings after earning 10 world points for his performance.

Built Ford Tough Series star, and four-time PRCA champion, J.W. Harrisfinished in second place. Harris faced Shephard in the final round of the bracketed event and rode The Hump for 85 points, just one quarter of a point shy of the win.

Harris’ 3-for-3 performance, though, gave him the highest aggregate score and helped him earn 80 world points. He currently sits at No. 31 in the world standings.

Shephard opened the night by taking on fellow Queenslander, Jason Mara. Both were bucked off, but upon further review Shephard managed to stay on longer and advanced to Round 2 based on buckoff time. In Round 2, he faced Sonny Schafferius and once again managed to hang on just a bit longer than his opponent.

Cody Heffernan (No. 41) finished in third place in the aggregate picking up 30 world points while Troy Wilkinson (No. 30) finished in fourth place for 20 points toward the world standings.

The PBR Australia Champion will also earn an international invitation to compete at the Real Time Pain Relief Velocity Tour Finals at Las Vegas’ South Point Arena Oct. 28-30. There they can earn a chance to compete at the PBR Built Ford Tough World Finals down The Strip at T-Mobile Arena Nov. 1-5.