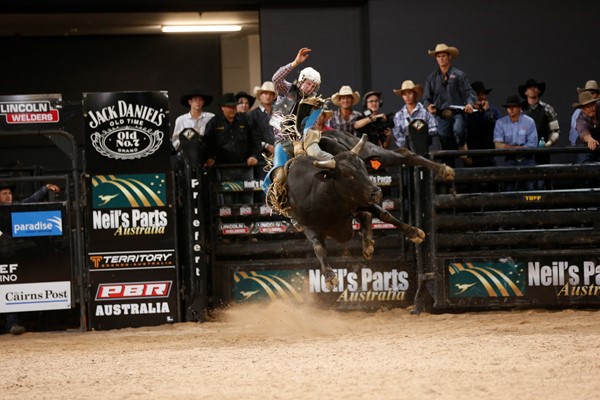 Aaron Kleier has moved back up to number one in the Australian standings following his runner up placing at Cairns on the weekend.

In the tightest battle witnessed in PBRA’s history there are five cowboys all well within close range, less than 550 points separates them.

550 points may sound a lot but when you take into account Kurt Shepherd picked up 480 points on the weekend – you know that this title race is far from over.

Then when you take a look at the guys out of the top 5, you have a line up that oozes experience and could well be the game changers.

The next two weeks are critical in deciding who our Australian champion will be – This Saturday night at the Brisbane Entertainment Centre, who will be The Last Cowboy Standing and potentially pick up 700 points; then onto Qudos Bank Arena Sydney 22 July for the Finals the stakes get a little higher – 2000 points for anyone that can win every round and the aggregate – a tough task but any one of the qualifiers is capable of doing just that.

Who will take out this year’s title and the $20,000 bonus? Time will tell but fans do not miss out on all the action – Tickets are on sale click on to PBRAUSTRALIA.COM.AU and book now to avoid missing out.