RICHARDSON AND BABBINGTON IN TIGHT BATTLE FOR VELOCITY FINALS INVITE 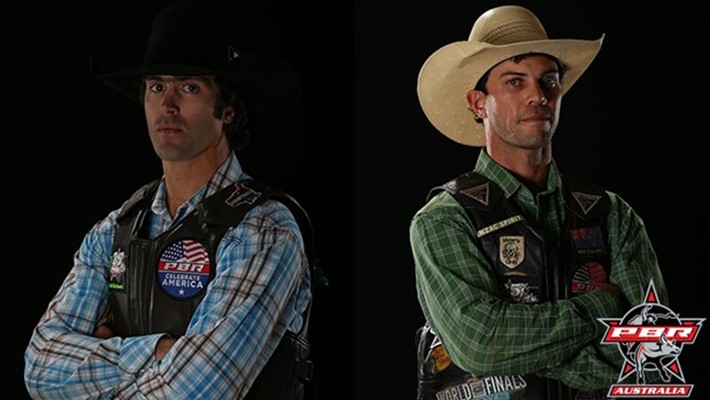 PUEBLO, Colo. – The race for the PBR Australia international invite for the 2018 Real Time Pain Relief Velocity Tour Finals on Nov. 2-3 is coming down to the wire.

PBR Australia leader Aaron Kleier has turned down the opportunity to ride in Las Vegas for the second consecutive year, according to the PBR competition department, which has opened the door for either No. 2 Cliff Richardson or No. 3 Fraser Babbington to earn the Australian invite and a shot at qualifying for the 2018 PBR World Finals.

Richardson and Babbington are separated by only 49.17 points ahead of this weekend’s PBR Australia Monster Energy Dubbo Invitational in Dubbo, Australia.

Dubbo is the final PBR Australia event before the Velocity Finals get underway at the South Point Hotel Casino & Spa.

“Me and Cliffy are neck and neck this season,” Babbington said in Fairfax, Virginia. “Aaron is not that far ahead.”

The PBR Australia invite will compete against the invites from PBR Brazil, PBR Canada and PBR Mexico for one wild card position at the PBR World Finals. The highest-finishing international invite that is not ranked inside the Top 35 of the world standings at the conclusion of the Velocity Finals will earn the wild card.

Richardson and Babbington have never qualified for the PBR World Finals. (Babbington did ride as an alternate in 2016).

The only path left for either rider to make the World Finals is the Velocity Tour Finals. Both riders are too far back of the Top 35 with less than three weeks until the marquee event of the PBR season begins on Nov. 7 at T-Mobile Arena.

Richardson, who made his premier series debut last month in Springfield, Missouri, is the older brother of six-time PBR World Finalist Lachlan Richardson.

Cliff has the second-most rides (31) in Australia and is 31-for-60 in 31 PBR Australia events this season and has three victories and 14 Top-5 finishes.

“Oh it is always fun, but when you can stay healthy and ride bulls it is good,” Richardson said this summer at the Sydney PBR Global Cup. “It is tight. There is nothing like a close race. I reckon it is not over until the last bull is bucked at the Finals.”

“It would mean the world,” Richardson said. “That is what you set out to do as a kid, to win a title in your home country. It would be pretty special. It is something I have been working on for a long time and it doesn’t work for everyone, but that is certainly the plan.”

Babbington won the 2015 PBR Australia title and the last two years has come up just short of a Top 35 qualification to the World Finals.

“No one has ever competed from New Zealand in the PBR (premier series until me),” Babbington said. “For me to make the PBR World Finals from home would be a pretty big achievement for me. I have not finished in the Top 35. I was only an alternate. That would be a pretty good achievement for me by the end of it, especially having to travel out of home and coming so far.”

Babbington is 26-for-46 (56.62 percent) with six victories. He has been on 14 fewer bulls than Richardson at PBR Australia events.

The 31-year-old has dialed back how hard he is going up and down the road this season as he begins to take over his family’s business on their ranch in Gisborne, New Zealand.

Babbington for sure wants a spot in Las Vegas, but the opportunity to become only the third rider to win multiple PBR Australia titles is not lost on him either.

“Win that Australian title too,” Babbington added. “Our Finals is two weeks after the (PBR World) Finals.”