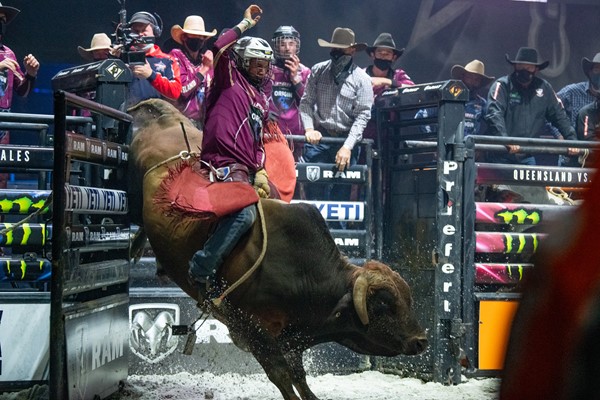 The 2022 PBR Australia Origin series will conclude May 21 in Brisbane, Queensland.

WHO WILL RIDE SUPREME IN BRISBANE – This weekend, the 2022 PBR Origin series will come to a climactic end as Brisbane, Queensland, and Brisbane Entertainment Centre prepares to host PBR Origin III. The 2022 PBR Origin marks the third iteration of the state vs. state bull riding showdown, modeled after the State of Origin rugby league event that is considered Australian sport’s greatest rivalry. Action gets underway at 7:00 p.m. AEAT.

THIS WEEKEND’S FORMAT – The 2022 PBR Australia Origin III – Brisbane will feature three rounds of competition. After each of the 10 competing bull riders for both teams attempt one bull each in Round 1 and Round 2, the Top 4 riders from each team will advance to the bonus round for one final out. The event winner will be the team with the highest combined score in the event aggregate. In addition to vying the title of PBR Australia Origin Champion and their share of the event purse, riders will also be competing for points towards the Australian national standings and broader PBR World Standings. All points will be awarded for each riders’ efforts in Round 1, Round 2 and the event aggregate. No points will be awarded for the bonus round.

LET’S RECAP: PBR ORIGIN I – NEWCASTLE – In late March, the 2022 PBR Origin series got underway in Newcastle, New South Wales, as Team Queensland fought off a hard-charging Team New South Wales to edge to an early 1-0 lead in the battle of states. Here is a round-by-round recap of the opening event:

LET’S RECAP: PBR ORIGIN II – TAMWORTH – The 2022 PBR Origin series continued with the second installment of the state vs. state showdown in late April in Tamworth, New South Wales. In a must win situation, a resilient Team New South Wales kept their championship dreams alive, edging Team Queensland by one ride to win PBR Origin II – Tamworth and even the score to 1-1.

TEAM QUEENSLAND – These are the 10 riders that will ride for the Team Queensland Maroons at PBR Origin III – Brisbane:

*Denotes a rider who did not compete at PBR Origin II – Tamworth.

TEAM NEW SOUTH WALES – These are the 10 riders that will ride for the Team New South Wales Blues at PBR Origin III – Brisbane:

*Denotes a rider who did not compete at PBR Origin II – Tamworth.

FAMILIAR WATERS – Round 1 of PBR Origin III – Brisbane, three riders will face rematches, headlined by the fourth meeting between Aaron Kleier and Freckles Brown. After Freckles Brown bucked off Kleier in 3.6 seconds during the inaugural PBR Origin event in Sydney, New South Wales, in 2019, Kleier covered him in their very next out, scored 89 points later that season in Cairns, Queensland. However, Freckles Brown bested Kleier in their most recent meeting, bucking him off in 4 seconds during a 2020 tour stop in Rockhampton, Queensland. Beau Willis and Brumby Brandenburg will also face familiar opponents in the opening round. Willis will look to avenge his 3.05-second buckoff dealt to him by Double Dealings earlier this year in Toowoomba, while Brandenburg will be eager to reverse his fortunes from 2020 when Dunya Jacket bucked him off in 3.62 seconds in Toowoomba.

In Round 2, five riders will face past opponents. For Lachlan Richardson, he will be locked in a rubber match with Flyin Hippie. After bucking off the bull in 1.86 seconds in Airlie Beach, Queensland, in 2020, Richardson covered him for 87.5 points at the 2021 event in Burnett Heads, Queensland. Qynn Andersen will also climb aboard a bull he has attempted twice prior, but however, has never made the 8. Registering both buckoffs this season, Comeback Kid first got the better of Andersen in 1.72 seconds in Rockhampton, Queensland, only to toss him in 3 seconds at the recent event in Bloomsbury. The other rematches are:

PAST BRISBANE EVENT WINNERS – The PBR last travelled to Brisbane in 2021, hosing the opening installment of that season’s PBR Origin Tournament. At the event, the raucous crowd inside Brisbane Entertainment Centre was kept on the edge of their seats until the final out as Team New South Wales and Team Queensland duked it out to determine which state is the supreme bull riding powerhouse. Holding off a hard-charging Team New South Wales, Team Queensland won the opening stop of the three-part tournament in Brisbane, edging the Blues by one ride and a mere 88 points. Not including the 2021 PBR Origin stop, historically, PBR Australia has held nine events in Brisbane, including the uniquely progressive elimination formatted Last Cowboy Standing from 2015-2019. Riders from around the world travelled to Brisbane, Queensland looking to conquer Australia’s rankest bulls, earn crucial world and national points, and be crowned the season’s Australian Last Cowboy Standing. In 2019, Kurt Shephard went a perfect 3-for-3 to earn the victory in Brisbane. Shephard first rode Posting Bail for 82.5 points, before going the distance aboard POA Lock N Load for 88.5 points, and covering Ooh Call Me Joe for 86.5 points. Throughout the PBR’s storied history in Brisbane, only one rider, Cody Heffernan, has won the tour stop in back-to-back seasons. After dominating the event in 2015, Heffernan was again crowned the Last Cowboy Standing in 2016 en route to his first PBR Australia Championship.

The complete list of past winners for the non-PBR Origin events is as follows:

NEXT UP – The 2022 PBR Australia season will continue Saturday, May 28 for PBR Cooyar Touring Pro Division event in Cooyar, Queensland. Action at the Cooyar Showgrounds will get underway at 7:00 p.m. AEDT.