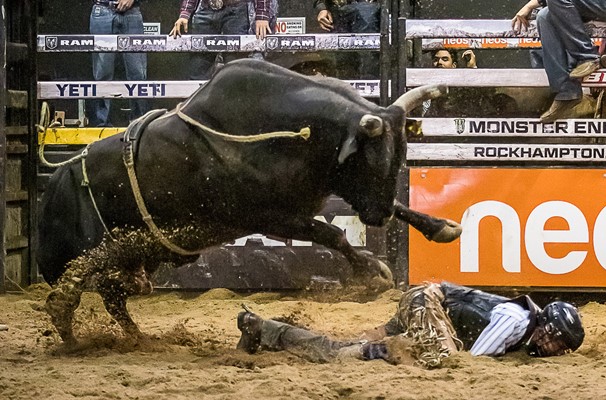 Tonight, the PBR Australia Monster Energy Tour heads to the banks of the Murray River in northwest Victoria for two rounds of bull riding action.

As has been the theme so far in the 2022 season, the draw contains plenty of bucking bulls with limited experience at this level, as well as a bunch of cowboys that we have only seen compete in PBR competition a handful of times in the last two years.

There are still representative spots in the PBR Origin teams for both Queensland and New South Wales up for grabs, so that will add some extra excitement to what is already shaping up as a very intriguing event.

View the daysheet for stop four of the 2022 PBR Australia season.

Let’s look at some of the highlight matchups:

Cody Heffernan on Street Kid (Woodall Rodeo Company)
The NSW Captain has made a solid start to his 2022 season, recording back to back runner-up results to sit second in the National Standings. Here he faces Street Kid, who we saw perform on the southern run before the COVID-19 shutdown. Mitchel Paton made the whistle in Adelaide for 83-points, but the bull got the better of Rubens Barbosa three weeks later in Melbourne. This bull turned back to the left on both of those occasions, and that puts him away from the Singleton veteran’s hand, but Heffernan looks in good enough form to make it work.

Bradie Gray on Almost Evil (TnR Bucking Bulls/Baille)
A big welcome back to the Tamworth cowboy, who makes his first PBR Australia appearance since the 2018 Iron Cowboy. He has been putting together some nice rides in the practice pen, and that work should benefit him here in the opening round. Almost Evil has been out twice at this level, splitting the results with his opponents. Fellow leftie Jake Curr put together a nice ride into his hand to score 86-points at Scone last month to finish runner up in the first long round. If the bull delivers a similar trip and follows the gate, Gray won’t be far off reaching the whistle.

Caiden Sandilands on Told Ya So (TnR Bucking Bulls)
The Rockhampton bull rider faced a tough run of buckers in his season debut at Rockhampton in February, but his task here looks much more manageable. Told Ya So has been ridden three times in his seven trip PBR Australia career. All three scores belong to right-handed riders, while left-handed cowboys are 0-for-2. This bull looks to prefer a spin to the right, but at Scone, we saw him turn back to the left to buck off Lachlan Richardson. Sandilands is never far off from making the bell when a bull turns back into his hand, so it could be lights out if the bull chooses a spin to the left.

Oscar Leake on Cliffhanger (TnR Bucking Bulls/Richardson)
Cliffhanger looks one of the better draws in this round. He has been ridden three times from his seven PBR Australia trips. We have seen riders marked as high as 88.5 points, and that score went to Cody Heffernan for a round win at Scone in February. Aaron Kleier and Cliff Richardson have also posted mid-80 point rides on this bull. The right-handed Leake will be looking to pick up his first qualified ride of the year and regain his spot in the NSW Origin team. The bull prefers a clockwise spin, so I don’t think he will be far away with opportunity on the line.

Qynn Andersen on Mr Buckmore (TnR Bucking Bulls)
In my opinion, Andersen has drawn the best bull in the round. Mr Buckmore enters the night with a 13-and-5 record, with four of those scores good enough to pick up a round win. The latest of those went to Nathan Burtenshaw, where 88-points was enough to win him the Championship Round at Melbourne in 2019. Four of the five scores went the way of right-handers. This bull can mix up his trips, and he does turn right most of the time. The Koumala young-gun will be ready to go big in his return from injury.

Lachlan Richardson on Rolling Thunder (TnR Bucking Bulls/Baille)
I am not sure we saw the best from Rolling Thunder at the Score Invitational. He appeared to want to enter a spin to the right, but he looked to hip himself and ended up spinning to the left. Despite the inconvenience, his bull score was still an excellent 42-points, and I think we can expect another good showing from the bull here. Richardson was shut out at Scone in his 2022 season debut, but I don’t expect he will stay on the zero for long. The Gresford cowboy shouldn’t be too far off recording a score in this matchup with a massive run of bright light events on the horizon.

Will Purcell on Crackalackin (TnR Bucking Bulls)
Purcell loves riding in his home state, and he heads west fresh off a win at his hometown show. Here he faces Crackalackin, who has been ridden twice in twelve PBR Australia performances. Both scores belong to right-handed riders, with Brady Fielder and Lane Mellers marked 82.5 and 86-points, respectively. The bull produces consistent trips with plenty of kick and power. He does prefer a right-handed spin, which puts him into the Merrijig talent’s hand, and that could mean we see some fireworks to close out the night.