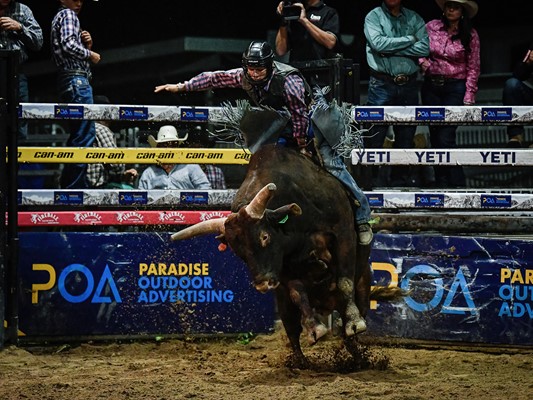 The 2022 season for the PBR Australia Monster Energy Tour will continue March 19 in Mildura, Victoria.

RETURNING TO VICTORIA – This weekend, for the first time since March 2020, the elite PBR Australia Monster Energy Tour will travel to the state of Victoria. For the second time in history, the organization will buck into Mildura, holding the fourth event of the 2022 season, the PBR Monster Energy Tour Mildura Invitational, at the Mildura Recreation Reserve - Brian Weightman Oval, on Saturday, March 19 at 7:00 p.m. AEDT.

THIS WEEKEND’S FORMAT – The PBR Australia Monster Energy Tour’s Mildura Invitational at Mildura Recreation Reserve - Brian Weightman Oval will feature two rounds of bull riding. After all competing bull riders attempt one bull each in Round 1 and Round 2, the event champion will be determined by the rider with the highest total score from their two draws. One rider will have the opportunity to earn a maximum 80 national points, with 50 to be awarded to the event victor, and 15 to each round winner.

TIME TO MAKE THE TEAM – This weekend’s event in Mildura will mark riders’ last chance to earn a berth to compete for Team New South Wales or Team Queensland at the 2022 iteration of PBR Origins, beginning March 26 in Newcastle, New South Wales. Team New South Wales will be captained by 2016 PBR Australia Champion Cody Heffernan, while four-time, and reigning, PBR Australia Champion Aaron Kleier will lead defending event winners Team Queensland. Each team will be comprised of 10 riders, including the captains, with the remaining nine positions filled by the current national and world standings prior to each Origin event. While Heffernan and Kleier have their spots locked for each of the three installments of the state vs. state tournament, the remaining nine positions can fluctuate. Following the PBR Mildura Invitational, each state’s roster will be set for the opening event, PBR Origin I – Newcastle, at Newcastle Entertainment Centre.

FAMILIAR WATERS – This weekend Round 1 of the PBR Mildura Invitational will feature one rematch as Brumby Brandenburg readies to attempt Cash Money for the second time in his career. The duo first met earlier this season in Scone, New South Wales, as Cash Money got the better of Brandenburg in 2.29 seconds.

PAST MILDURA EVENT WINNERS – Historically, PBR Australia has only held one prior event in Mildura, debuting in the Victoria city in October 2019. As one of four riders to go a perfect 2-for-2, Lawson Nobbs won the tour stop. He began the event with an 84.25-point ride on Wallaby Bob in Round 1, and then clinched the victory with an 84.5-point effort earned aboard High Flying Akubra. Looking down the leaderboard, Nathan Burtenshaw was second, followed by Aaron Kleier in third and Cliff Richardson in fourth, all of whom went a perfect 2-for-2 in Mildura.

BULL PEN – This weekend’s Monster Energy Tour event in Mildura, Victoria, will mark the PBR debut for many animal athletes. In Round 1, a maximum 15 bulls will buck for the first time in PBR competition, while in Round 2, 10 bovine athletes will potentially make their first out in PBR competition.

NEXT UP – The 2022 PBR Australia season continues Saturday, March 26 in Newcastle, New South Wales, as the 2022 PBR Origin tournament gets underway. Action for the PBR Monster Energy Tour Origin I – Newcastle, will get underway at 7:00 p.m. AEDT at the Newcastle Entertainment Centre.