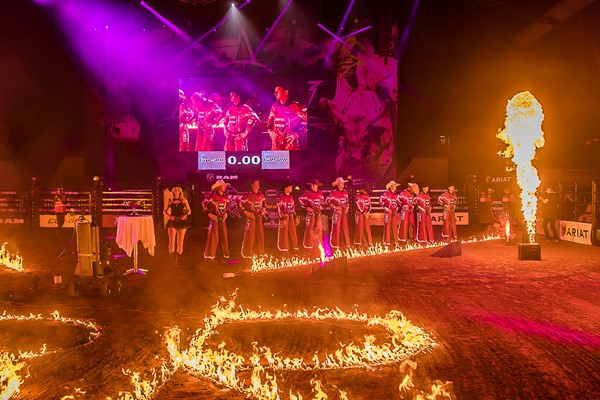 We saw a solid qualified ride percentage of 31.25% recorded at PBR Origin I in Newcastle a month ago, and I think the cowboys will be able to match that mark in the Country Music Capital tonight.

There have been a few changes made to both of the teams, and while the strength of the Queensland team remains much the same as it was in game one of the series, the New South Wales team appears to be stronger, and I think they have an excellent chance to level up the series at 1-all and force a decider in Brisbane next month.

Here are a few of the key long round matchups:

Aaron Kleier (QLD) on -551 Spokane (TnR Bucking Bulls)
Kleier will lead his team away against Spokane, who had an eight out buck off streak broken by Lachlan Richardson at Origin I in Newcastle when they combined for 84.5 points. The cowboys have covered this bull in 33.33% of his trips. When the ride result is a buck off, the average time is well over the 5-second mark. Eight of the nine bulls the Clermont Champion has faced this year have initially turned back away from his hand, and he has ridden six of them. So, with the bull expected to turn back to the right, he should be able to get Queensland off to a perfect start.

Cody Heffernan (NSW) on 719 Lost It (TnR Bucking Bulls/JC Cattle Co./Swain)
The Singleton Cowboy missed the final round in Toowoomba after succumbing to an ankle injury, but he should be rearing to go here after resting up for a couple of weeks. He is 4-for-6 across his last two tour stops and looks back to his best. Lost It has split his first two career PBR trips with the cowboys. In his debut at Mildura, he picked up a quick 2-second win over Jack Keats, but in Newcastle, Braith Nock dominated him for 84-points. His preferred trip looks to begin with a slight fake to the right before turning back to the left. This looks to be a nice matchup for Heffernan despite the spin direction.

Lachlan Slade (NSW) on 22 Bex (Maynes Bucking Bulls)
We haven't seen much of Bex so far in his PBR Australia career, with his two buck-offs coming at 0.20 and 2.44 seconds. He appears to favour a right-handed spin, so I think Slade will be able to give him a good crack here. The Tamworth cowboy always shows up for his state and has covered almost 50% of his bulls in Origin competition. The 2021 Cowboy of Origin will be eager to put a rough weekend in Toowoomba behind him with an early 8-second bull ride into his riding hand.

Kelsey Pavlou (QLD) on 862 Feldt Jacket (MJ Bucking Bulls/Shultz Bucking Bulls)
Pavlou's streak of covering a bull in the opening round of an event was extended to five events at Rockhampton last weekend, and I think he can extend it to six here. Feldt Jacket wasn't at his best in his debut trip at Scone, but we have seen him deliver much better trips, so I am happy to put that performance down to nerves. We should see this bull take a brief look to the right and turn to the left. The Gracemere talent has struggled to put together rides away from his hand so far in his career, but this is one bull that I think he can get nailed down.

Ben Moran (QLD) on 864 Night Fury (ST Bucking Bulls)
The Yeppoon young-gun is starting to find his groove on tour, picking up a couple of qualified rides at the last two tour stops. Night Fury has split his six PBR Australia trips with the cowboys for an average of 83.33 points. Kurt Shephard and Qynn Andersen have both won rounds on this bull this season. He returns to the left chutes tonight after bucking from the right delivery in his last three outs. I don't think that alters his trip too much. We have seen him turn back to the left and the right, but the left-handed Moran should get a good shot at him either way in his Origin debut.

Braith Nock (NSW) on 657 Life Plus 20 (TnR Bucking Bulls)
Nock is another rookie rider who has put up some good scores in his first year on tour. He was 84-points in his Origin debut at Newcastle and then won the Championship Round at Toowoomba with his second qualified ride of the weekend. Life Plus 20 has bucked off two cowboys to begin his PBR career, posting 42.5 points in his latest trip at Origin I. We have seen him turn back in both directions, but he looked at his best when looking right and turning back to the left. That puts him into the Bendemeer cowboy's wheelhouse and gives him a chance to post a solid score.

Trefor Sproule (NSW) on 824 Natural Hillbilly (TnR Bucking Bulls/JC Cattle Co.)
Only three trips into his PBR career, Natural Hillbilly appears as though he may develop into another favourite of the riders. Brumby Brandenburg and Qynn Andersen both made the whistle for scores of 86.5 and 85-points respectively, on their way to winning event titles at Mildura and Newcastle. The bull has turned back to the right in all of his outs and bucks at a nice tempo. Sproule was shut out at Origin I, but he will be keen to get his name on the leaderboard here in the second match, and this appears to be a great opportunity for the Singleton veteran to do just that.

Jackson Gray (QLD) on 420 Ghost Town Hornet (J&J Riverview Cattle Company)
Gray will make his debut for the Maroons tonight, and he enters the match in good form, covering two of his five bulls since returning from injury at Toowoomba. Ghost Town Hornet is also relatively new to the tour, but I think he showed us enough in his debut trip at Scone to indicate that he will fit well with most riders. He turned to the left, stalled his spin slightly, and continued to the left. That should suit the Barcaldine leftie, and I think he can post a score in what could be a crucial matchup early in the section.

Nathan Burtenshaw (NSW) on 365 Jack Frost (Dan Klabe)
The last time we saw Burtenshaw in a Blues jersey, he produced one of the rides of the season aboard Ray Ban for 89.5 points to split the 2019 Cowboy of Origin award with Mitch Paton. His recent form has been good, and here will face Jack Frost for the third time in PBR competition. He took out their first bout, marked 83.5 points at Grafton in 2018, but the bull recorded a quick 2.41-second win at the Iron Cowboy in this arena back in 2020. We haven't seen this bull since that performance here in Tamworth, which extended his buck off streak to seven straight riders. He was regularly around to the left, which should put him away from the Coonamble cowboy's riding hand.

Lachlan Richardson (NSW) on 473 Im Cool (Dan Klabe)
The Gresford veteran appears to be heating up after a slow start to the 2022 season. Last weekend, he went 2-for-2 in Rockhampton to finish runner up behind Aaron Kleier. He will face I'm Cool, whom we haven't seen buck at this level since 2019. He was ridden on debut by Lane Mellers for 84.5 points and the round win, but his sharp turn to the right was too much for Jake Curr a couple of months later at the Iron Cowboy here in Tamworth. This bull is far from fresh in my mind, but I think Richardson is seeing them well enough to get him covered no matter which way he turns back.

Aaron Kleier (QLD) on 8 Volatile (Maynes Bucking Bulls)
My eyes were immediately drawn to this matchup when I opened the day sheet on Wednesday afternoon. Volatile has been ridden five times in his seventeen PBR Australia performances, with four of those scores good enough to pick up the round win. Most of his trips are to the left, but he can fake to the right before entering his spin, so it is no surprise that four of the five scores recorded belong to left-handed riders. The average mark of those scores is 86.38 points, so on paper, it looks as though the Queensland captain has an opportunity to be a bunch of points if he can make the bell.

Cody Heffernan (NSW) on 755 The Pet (ST Bucking Bulls)
The riders strung together three straight qualified rides aboard The Pet to begin his PBR Australia career, but he has been tough to get past since then, going 7-for-9 in the last six months. It seems to take an 'off day' for us to see him covered, with the two scores coming from trips where the judges marked him 41-points. On the other hand, he has averaged a bull score of 42.38 points in his seven buck-offs. He is always around to the left, so the New South Wales captain will need to be at his best if he wants to close out the second long round with a score, and the potential for significant numbers is there.