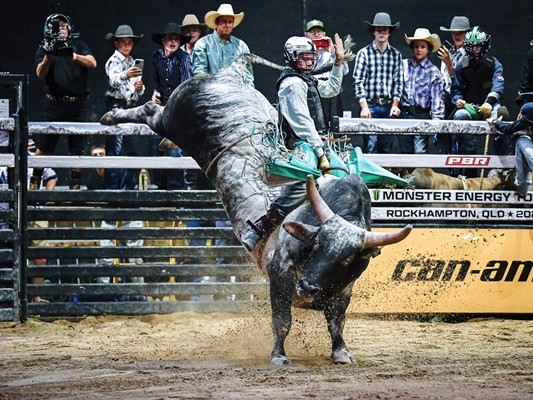 RETURNING TO ROCKHAMPTON – This weekend, for the 33rd time in league history, PBR Australia will travel to Rockhampton, Queensland. As the seventh event of the 2022 season, and third stop in Rockhampton, the PBR Monster Energy Tour Rockhampton Invitational will buck into the Great Western Hotel on Saturday, April 16 at 7:00 p.m. AEDT.

THIS WEEKEND’S FORMAT – The PBR Australia Monster Energy Tour’s Rockhampton Invitational at the Great Western Hotel will feature two rounds of bull riding. After all competing bull riders attempt one bull each in Round 1 and Round 2, the event champion will be determined by the rider with the highest total score from their three draws. One rider will have the opportunity to earn a maximum 80 points, with 50 to be awarded to the event victor, and 15 to each round winner.

KLEIER RIDES TO VICTORY – After making his 2022 season debut at PBR Origin I – Newcastle, helping lead Team Queensland to victory, Aaron Kleier continued his winning ways at the most Monster Energy Tour stop in Toowoomba. Topping two rounds of competition, Kleier clinched the event win at the Toowoomba Invitational at Meatstock, catapulting him to No. 5 in the race for the 2022 PBR Australia Championship. While Kleier’s outing at the Toowoomba Showgrounds began in less-than-ideal fashion, bucked off by Double Dealings in 5.76 seconds in Round 1, the reserved Queensland contender was quick to rebound as Championship Saturday got underway. Kleier first topped the field in Round 2 when he covered Mickey Mouse for a commanding 86 points. In Round 3, the 24-year-old again led the draw, conquering Pirate Patch for 83.5 points. While Kleier was unable to cap his event with a qualified ride, bucked off by Pretty Boy in 3.14 seconds in the championship round, his back-to-back, round-winning scores were enough to clinch the win at the PBR Toowoomba Invitational at Meatstock. For his efforts, Kleier collected a crucial 100 national points. He is now ranked No. 5 in the national standings, 104.5 points behind the No. 1 position.

In 2022, Kleier is chasing history. After tying David Kennedy for most Australian national titles won by one rider in league history in 2021, each now with four, should Kleier win his unprecedented fifth consecutive national title at season’s end, he would become the winningest bull rider in PBR Australia competition. In Rockhampton, Kleier will attempt Get A Haircut in Round 1 and Rambo in Round 2.

FAMILIAR WATERS – While no riders will face a familiar opponent in Round 1, two riders have drawn a rematch in Round 2 of the PBR Australia Monster Energy Tour’s Rockhampton Invitational. For four-time PBR Australia Champion Aaron Kleier he will again attempt Rambo. The duo of athletes first went head-to-head in Julia Creek, Queensland in 2019 with Rambo besting Kleier in 2.05 seconds. Kelsey Pavlou will also climb aboard a bull he has past attempted in Vertical Limits. A showdown already seen in 2022, Vertical Limits bucked off Pavlou in 2.27 seconds earlier this year in Rockhampton.

PAST ROCKHAMPTON EVENT WINNERS – One of the longest tenured events in PBR Australia history, since the Queensland city welcomed the league for the first time in 2006, PBR has held a total of 32 events in Rockhampton, including seven tour stops throughout the 2021 campaign, and two held to date in 2022.

At the most recent PBR event in Rockhampton in mid-February, Brady Fielder went 1-for-3 to clinch the event win and further his then stronghold on the No. 1 rank in the race to be crowned the 2022 PBR Australia Champion. While Fielder’s event began in less-than-ideal fashion, bested by Territory Ringer in a hard-fought 6.55 seconds in Round 1 and by Black Tuxedo in a swift 3.31 seconds in Round 2, the resilient cowboy returned determined in the championship round. Drawing Freckles Brown, Fielder matched the powerful animal athlete for an event-best 87.5 points, propelling him to the top of the event leaderboard. Marking his second event win of the season, Fielder’s golden effort earned him 65 national points, and he extended his lead to 76.5 points over then No. 2 Cody Heffernan.

NEXT UP – The 2022 PBR Australia season will continue Saturday, April 23 for the second iteration of the 2022 PBR Origin Tournament in Tamworth, New South Wales. Action inside AELEC Arena will get underway at 7:00 p.m. AEDT.