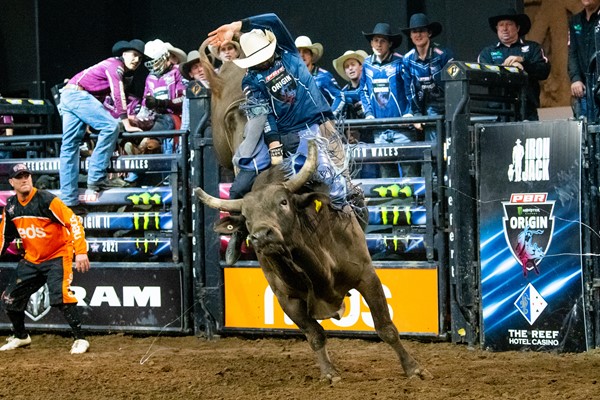 SYDNEY – In 2021, PBR Australia isn’t only making history on the dirt inside the arena, but the league is also breaking boundaries in the broadcast world.

For $4.49 AUD fans will be able to watch the LIVE stream of all the events, and the on-demand video of the tour stop which will publish in the days that follow.

The broadcast of the PBR Mackay Invitational, presented by Kent Hire, will make the league one of the world’s first major sporting organizations to offer pay-per-view events on Facebook, and the first to do so in Australia.

“It’s a huge step forward for us,” said PBR Australia General Manager Glen Young. “With many of our fans in lock down and or stuck across borders it allows us to get them back access to our live events once again.”

Following this weekend’s event in Mackay, LIVE broadcasts of the following tour stops will also be available for the one-time fee of $4.49 AUD:

“This is the pointy end of the season where every event, and every bull for that matter, is super crucial,” Young added. “Keep tuned every week as the season is only going to get more exciting going into these final stages.”

The PBR Australia Monster Energy Tour broadcasts will showcase the arena feed, giving viewers the intimate feeling of being dirt side from the comforts of their own home. Anticipated to offer 2.5 hours of heart-pounding entertainment, the LIVE stream offers and affordable evening of family-friendly fun that won’t be easy to replicate.

“The top guys are focused on staying at the top of the ladder and chasing down the number one spot, the guys in the middle of the pack are looking to make a move to the top group, the guys at the bottom are doing their best to maintain a Grand Finals Spot whilst the guys outside the qualifying positions are eager to secure a spot,” Young added of the feverish competition expected the remainder of the year.

“On top of that the stock contractors are looking to get their top bulls qualified, whilst the protection athletes are doing everything they can to be noticed by the riders to earn one of the three Grand Finals jerseys.

“When you mix that all together you get edge-of-your-seat entertainment that will keep fans glued to their screens from the first ride of the night right through to the last.”

The revolutionary broadcasts come amidst a season of historic proportions.

After becoming the first-ever rider to win the PBR Australia Championship in three consecutive seasons in 2020, Aaron Kleier is chasing even rarer air in 2021.

Should Kleier win the national title an unprecedented fourth consecutive time, the Queensland sensation would tie David Kennedy for most Australian national titles won by one rider in PBR history. Kennedy topped the national standings in 2009-2010, 2012 and 2014.

And while Kleier currently holds an 84.33-point lead atop the national standings, veteran contender Kurt Shephard is mounting a career-best campaign as he attempts to thwart Kleier’s bid and secure his career-first national title.

Shephard inched closer to actualizing that goal at the most recent event in Rockhampton, going a near-perfect 2-for-3 to surge to No. 2 in the national standings.

Competing at seven events to date on home soil, Shephard has registered a Top-10 effort in each outing, going 12-for-17.

“This season has been quite unique,” Young said. “Veterans like Lachlan Richardson who just missed out on an Australian title last year has had a super tough and challenging year, Aaron Kleier continues to be Mr. Consistency, Kurt Shephard in my mind has been the one to watch all season, he’s been solid as a rock and he has now positioned himself as a main contender for the 2021 Australian title.”

“Then there’s Macaulie Leather, first season on tour, leading the race for the rookie title, but also in with a shot for the Australian title. I could go on as there are quite a few guys hitting form that could disrupt the whole final race like Lawson Nobbs, Dan Ruhland, Kelsey Pavlou, Troy Wilkinson and Lachlan Slade.”

“From this weekend forward it is all about drawing right and making 8, the most consistent rider will prevail as the No. 1 guy come the end of this season.”