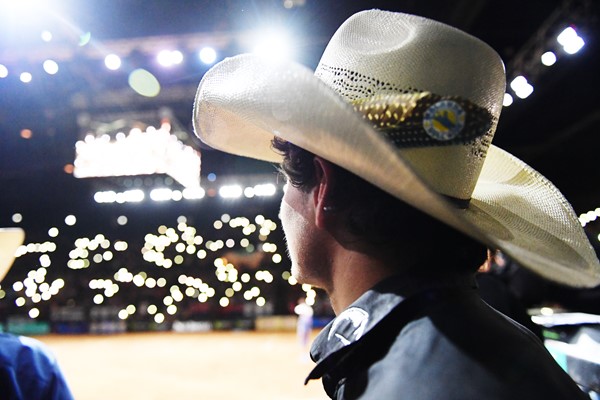 In the past few editions of the Grand Finals, we have seen the cowboys get off to a hot start, and this year's opening round looks no different. Round 1 is full of favourable matchups, but things will get much more challenging for the riders in the second round of the night.

Round 2 features most of the Bucking Bull of the Year contenders, so riders will have their work cut out to make the whistle. Any qualified ride made in this round will benefit those cowboys with event title aspirations.

Let's breakdown some of the highlight matchups from the first two long rounds:

View the daysheet for the opening rounds of the 2021 PBR Australia Grand Finals.

Brady Fielder on Meet Ya Maker (MJ Bucking Bulls and Keliher Bucking Bulls)
The Clermont cowboy comes into his third PBR Australia Grand Finals off the back of a solid 2-for-3 performance at the final regular-season tour stop in Rockhampton. He gets an excellent chance to post a qualified ride in the opening out of the round aboard Meet Ya Maker. This bull has been out nine times and has been ridden four times for an average score of 83.25. He turns back to the right, which should give Fielder a flying start in the event aggregate.

Joshua Jones on Down and Dirty (CF7 Bucking Bulls)
Jones is another rider who enters the Grand Finals in good form. The Kingaroy talent took a nasty shot in the final ride of his 2-for-3 night in Rockhampton earlier this month, but he tells me he is good to go. Down and Dirty was ridden for the first time at the tour stop in Emerald last month. That 84.50-point score went to fellow leftie Lawson Nobbs after the bull turned back into his riding hand. Jones should enjoy a similar trip here.

Lachlan Richardson on Pay Cheque (CF7 Bucking Bulls)
We have only seen Pay Cheque once on tour, and he picked up the win, bucking off Beau Willis in 4.19 seconds at Emerald. He turned back to the right in the gate on that occasion, and his tempo was quite rider-friendly. If he produces a similar trip here, I expect Richardson to pick up a score. The Gresford veteran hasn't had the best run into his eighth Grand Finals, but he always finds a way to take his performance to another level under the bright lights.

Qynn Anderson on Old School (BK Bucking Bulls)
In the opening round, Anderson faces Old School, who is unridden through three trips in PBR competition. I think this bull will suit the right-handers much more than the lefties. After bucking from the right chutes last time out at Caboolture, he goes back to the left delivery tonight, and that should see him turn back to the right. This matchup looks like it should suit the Koumala young gun, who has produced some lovely rides in his rookie season.

Aaron Kleier on Suga Boom Boom (BK Bucking Bulls)
The three-time National Champion should be full of confidence off the back of his 3-for-3 performance in Rockhampton a fortnight ago. Suga Boom Boom has been ridden just twice from eleven trips at this level, but both of those scores went to left-handed cowboys for 85 and 86-points. He prefers a left-handed spin, which puts him into Kleier’s wheelhouse, and that usually results in a qualified ride.

Troy Wilkinson on Big Buck Hunter (ST Bucking Bulls)
Big Buck Hunter gets ridden in more than 50% of his trips, with the average score of the ten trips coming in just below the 85-point mark. He is a mighty bull who possesses excellent tempo. He turns back to the left and can reverse the spin in the second half of the 8-seconds. Wilkinson has gone 0-for-4 across the last two events, but he typically doesn’t stay down for long. With the bull beginning into his hand, the advantage should lie with the Upper Horton cowboy at his eighth Grand Finals.

Macaulie Leather on Black Tuxedo (Wallace Bucking Bulls)
This is the first of two very tough matchups listed for Leather tonight. The Calliope bull rider has bucked off five straight bulls since picking up the win at Emerald last month, and here he gets another bull that will likely turn back away from his hand. Black Tuxedo has bucked off his last seven opponents and has averaged a bull score of 42.29 points across that period. He has been making life difficult for the cowboys before the gate cracks, and that has been giving him the advantage. Leather needs to climb in and take his wraps quickly if he wants to tip the odds in his favour.

Lawson Nobbs on Notorious (Brandenburg Bucking Bulls)
Nobbs got the better of this bull earlier this season at the second PBR Origin event in Cairns for 84-points. The Moura cowboy is in great form, covering three of his last six bulls across the previous two events. Notorious gets ridden in 25% of his outs, and seven of those ten scores belong to left-handed riders. He can mix up his trips, but he prefers a turn to the left, and I see no reason why Nobbs can’t repeat his effort from July.

Troy Wilkinson on Roam Aviation High Risk (Dunne Bulls)
This is another rematch where the cowboy came away with a score earlier this season. The 2017 PBR Australian National Champion posted 84-points to pick up a round win at Mackay in October. Roam Aviation High Risk produces a consistent trip, and I think we will see the more experienced riders continue to take this bull deep into the clock. He takes two or three jumps out into the centre of the arena and turns back to the right. That will be away from Wilkinson's hand, but the last two scores have gone to left-handed riders.

Lachlan Slade on Drag Iron (Dunne Bulls)
Since late July, Slade has been out of competition with a broken back, but his form across the winter months makes him hard to go against. He went 4-for-6 across the PBR Origin series and picked up the first 90-point ride of his career aboard Cattle King’s Boogers Beach. Drag Iron has been ridden four times in his sixteen PBR outs, with scores averaging 85.50 points. In his last three trips, he has left the chutes looking to the left but turns back to the right. This will be a good test for the right-handed Tamworth cowboy after a long time away from the arena.

Mitchel Paton on Red Flash (Kleier Bucking Bulls)
The Nebo veteran hasn’t had his greatest few months on tour, going 1-for-9 across his last five starts. But he gets a good chance to post a score here against Red Flash. This bull has been ridden twice from seven trips with Aaron Kleier marked 85-points at the Great Western Hotel earlier this month. He turns back to the right and doesn’t stray too far from the gate. Paton should enjoy the more straightforward trip and won't be far away from grabbing himself a score in his ninth appearance at the Grand Finals.

Lachlan Richardson on Pretty Boy (Wallace Bucking Bulls)
Richardson gets his second crack at Pretty Boy after the two met up at Brisbane during July’s PBR Origin Series. The bull didn’t have the best trip on that occasion, but here we can expect him to turn back to the right and into the 2019 Grand Finals event champion's hand. Pretty Boy has bucked off eleven straight riders to begin his career and continues to get stronger, with his average bull score from his last three outs coming in at 44.13 points. If I had to pick a rider who I thought could conquer this bull, Richardson would be at the top of my list.

Kurt Shephard on Cattle Kings Boogers Beach (Dittmann Bucking Bulls)
Another heavyweight matchup that has generated plenty of conversations over since the draw was released on Wednesday morning. Shephard has largely missed out on the championship points on offer since finishing runner-up at Emerald. Boogers Beach gets riders back off their rope with a long leap to clear the chutes and then turns back sharply to the right and goes up. He represents an arduous task for all riders, especially left-handers, so the Mareeba talent will need to be at his brilliant best to make this one work.

Macaulie Leather on Roid Rage (Dittmann Bucking Bulls)
Roid Rage is unridden through ten career outs, averaging bull scores upwards of 43-points with buck off times around the 3.5-second mark. What makes this matchup interesting is the fact that the bull prefers a left-handed spin, and we haven't seen him go up against a left-handed rider of Leather's calibre. He does have some tricks and can stall and move forward to upset the rhythm of the rider. This will be another matchup worthy of your full attention.

Aaron Kleier on King Kong (Kleier Bucking Bulls)
We have already seen this paring go at it twice in a PBR arena, with the bull and the rider splitting the results. While the bull won their 2018 matchup in 7.97 seconds, Kleier was 88 points for the round win at Rockhampton for the round and event win earlier this season. King Kong has been ridden for scores averaging 86.50 points in three of his last five trips. He will turn back to the right and away from Keleir’s hand, but I think the Clermont bull rider will be too strong on his march to a fourth consecutive PBR Australian National Championship.