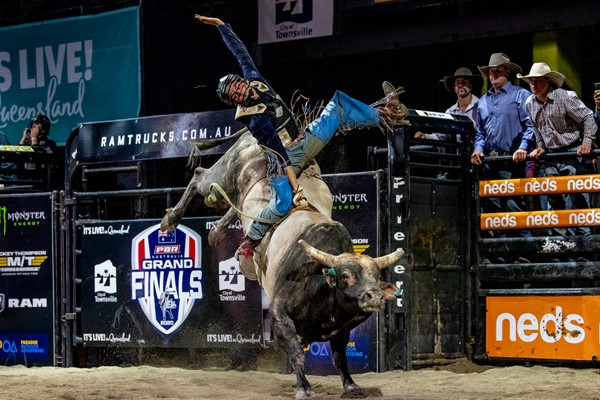 The 2021 PBR Australia Monster Energy Tour Grand Finals will be held in Townsville, Queensland, on Nov. 26-27.

With a maximum 200 points available to one rider, the Top 2-ranked riders in the nation are in contention for the 2021 PBR Australia Championship.

THIS WEEKEND’S FORMAT – The 2021 PBR Australia Monster Energy Tour Grand Finals at the Townsville Entertainment & Convention Centre will feature five rounds of bull riding. All competing bull riders will attempt one bull each in Round 1 and Round 2 on Friday, November 26, and in Round 3 and Round 4 on Saturday, November 27. At the conclusion of Round 4, the Top 8 riders in the event aggregate will advance to the championship round. The event champion will be the rider with the highest total score from their five draws.

KLEIER EYES HISTORY – After making history in 2020 by becoming the first rider in history to win the PBR Australia Championship in three consecutive seasons, Aaron Kleier is attempting to further etch his name in the league record books in 2021. Should he once again be crowned the national champion, Kleier would tie David Kennedy for most Australian national titles won by one rider in league history (4). Kennedy topped the national standings in 2009-2010, 2012 and 2014. And Kleier all but clinched the 2021 PBR Australia Championship as he won the final event of the 2021 regular season. Marking his league-leading fourth event victory of the season, Kleier won the seventh iteration of the PBR Rockhampton Invitational at the Great Western Hotel giving him a 195.83-point lead ahead of the 2021 PBR Australia Monster Energy Tour Grand Finals.

In Round 1 of the PBR Rockhampton Invitational, Kleier was quick to strike, avenging a 3.79-second buckoff from earlier this season in Mackay, Queensland, when he rode Red Flash for 85 points. Kleier surged to the top of the leaderboard when he dominated Round 2, covering Ariat’s Flaunt It for the second time in his career when he reached the requisite 8 for 83.5 points. As the last man to leave the chutes, Kleier punctuated his perfect performance with a championship round winning, 85.5-point ride aboard Big Bang Theory.

In addition to leading the league in event wins, Kleier holds the top riding percentage in Australia, having covered 20 of his 30 bovine athlete opponents (66.67%). Additionally, Kleier is one of two riders to have recorded a 90-point score in 2021. Responsible for the high-marked ride to date this year in Australia, Kleier covered Black Tuxedo in his first draw of the season for a monstrous 90.5 points. The ride propelled him to the event win and led him to sure to an early No. 1 ranking in the national title race.

Kleier’s campaign for the 2021 PBR Australia Championship will come to a climactic end in Townsville when he first faces Suga Boom Boom in Round 1, followed by a rematch in King Kong in Round 2.

When the 2021 season got underway in early May in Rockhampton, Leather made his PBR debut, finishing fourth, and surging to No. 4 in the early national standings. Going 1-for-2, Leather’s Top-5 finish was headlined by his 86-point effort aboard Iron Jacket in Round 1, which also marked his first-ever trip at a PBR event. As the season continued the very next day at Great Western Hotel, Leather began the event 48 points behind then No. 1 Kleier. In an effort that won’t soon to be forgotten, Leather dominated Round 1, topping the leaderboard with an 88.5-point score on Dance Monkey, to catapult himself to the event victory. Earning a crucial 65 national points, Leather catapulted to the top of the national standings, propelled 17 points ahead of No. 2 Kleier. In the subsequent events, while Leather was dethroned atop the standings by Kleier, he continued to excel, finishing sixth at the Touring Pro Division event in Townsville, fourth and second at the third and fourth iterations of the PBR Rockhampton Invitational, respectively, and sixth in the individual race at the PBR Origin I – Brisbane stop.

However, after an electric start to the 2021 season, Leather hit a bit of a slump as the season wound towards the year-end Grand Finals in Townsville. However, Leather recaptured his winning ways in late October in Emerald, Queensland. Capitalizing on the absence of No. 1 Kleier, who was sidelined by a shoulder injury, Leather delivered a flawless 2-for-2 performance to capture his second event win of the season. Rebounding from a shutout the weekend prior in Mackay, Leather was back to his winning ways in the opening round of action from the Emerald Showgrounds Rodeo Arena, delivering the second-best score when he covered Little Bitty for 81.5 points. The 20-year-old then faced off against Super Natural as the penultimate rider to leave the chutes in the final round. Poised, Leather matched the bovine athlete jump-for-jump, making the requisite 8 to tie for the round win with an 87-point score. As the 2021 season continued, Leather finished third in Caboolture, before concluding the regular season in less-than-ideal fashion, blanked at the seventh iteration of the Rockhampton Invitational.

In his career first PBR Australia Grand Finals, Leather has drawn Black Tuxedo in Round 1 and Roid Rage in Round 2.

HOT TAKES – Ahead of the 2021 PBR Australia Monster Energy Tour Grand Finals, here are a few other hot takes to note:

PAST PBR AUSTRALIA CHAMPIONS WINNERS – In 2020, Aaron Kleier made history, becoming the first rider in any of PBR’s international divisions to win a national title in three consecutive seasons. Only one rider has won four titles, David Kennedy in Australia, a feat Kleier is poised to match in 2021. Apart from Kleier, one additional PBR Australia Champion will compete at the 2021 PBR Australia Grand Finals in 2017 title holder Troy Wilkinson. A complete list of PBR Australia Champions is below.

FAMILIAR WATERS – Round 1 of the 2021 PBR Australia Grand Finals will feature five rematches, with three riders having experienced past success aboard their draw. For Lane Mellers, he will be locked in a rubber match with Freckles Brown. While Mellers covered the bovine athlete in their first showdown, marked 83 points at the 2020 event in Mackay, he was bucked off in their next meeting, brought down in 4.51 seconds later that season in Airlie Beach. Both Caiden Sandilands and Lawson Nobbs will attempt to remain perfect against their Round 1 opponents. Sandilands rode Dunya Jacket for 82.5 points earlier this year in Rockhampton, while Nobbs went the distance atop Notorious for 84 points during the 2021 PBR Origin II – Cairns tournament event. Of the remaining two contenders facing rematches, Bailey Woodard has attempt Annihilation twice prior. Annihilation first denied Woodard a qualified ride in 2019 in Mount Isa bringing him down in 3.85 seconds. Woodard was then bested in 3.2 seconds in their most recent head-to-head showdown, dispatched in 2020 in Ballarat, Victoria.

The second round of the 2021 PBR Australia Grand Finals will again feature five rematches, headlined by the third meeting of three-time, and reigning, PBR Australia Champion Aaron Kleier and King Kong. After bucking off King Kong in Rockhampton in 2018 in a heartbreaking 7.97 seconds, Kleier covered the bovine athlete for 88 points en route to the event win this July in Rockhampton. Nobbs will face off against his second familiar opponent in Round 2, climbing aboard POA Fully Locked & Loaded for the third time in his career. With both outs resulting in buckoffs, POA Fully Locked & Loaded bested Nobbs in 2.35 seconds in 2017 in Julia Creek, and again got the better of the cowboy this season in Mackay, sending him to the ground in 3.06 seconds. Apart from Kleier, 2017 PBR Australia Champion Troy Wilkinson is the only other rider in Round 2 attempting a bull they have previously covered. Marking their second meeting, Wilkinson first rode Roam Aviation High Risk for 84 points earlier this year in Mackay. The remaining Round 2 rematches are:

The 2021 YETI PBR Australia Bull and Rookie Bull of the Year will be the animal athlete with the top average score when combining his Top 4 outs from the season and his last out at the 2021 PBR Australia Monster Energy Tour Grand Finals. While all ABBI-registered bulls with four outs or more during the regular season can contend for the Bull of the Year honor, to be eligible for the Rookie Bull of the Year title, the animal athlete’s first season bucking at PBR competitions must have been no earlier than 2020. To be eligible for the 2021 YETI PBR Australia Stock Contractor of the Year honor, a company must be a member of the ABBI, and have participated at four Monster Energy Tour events in addition to being selected for the Grand Finals. At each event, a minimum of five bulls from the company must have bucked, logging a collective five trips. The Stock Contractor of the Year will be the outfit with the top average score when combining his company’s Top 4 average out scores from the regular season, with his average performance scores at the Grand Finals. Each event score is determined by the average of all the marks posted by the company’s bulls at a given event.

While all eyes have been on Cattle King Boogers Beach, Wallace Bucking Bulls’ standout Razor Sharp has remained a consistent force in PBR Australia competition. Razor Sharp registered 12 outs on Australia soil in 2021, earning the Bull of the Event honor five times. The impressive animal athlete was notably logged a career-best 45 points in July during PBR Origin II  - Cairns courtesy of his 3.22-second trip with Kurt Shephard, and capped the year with the top score of the event, marked 44.5 points at the seventh event of the season in Rockhampton when he tossed Lawson Nobbs in 4.54 seconds.

The top contenders for this year’s YETI PBR Australia Bull of the Year honor are:

The top contenders for this year’s YETI PBR Australia Rookie Bull of the Year honor are:

The success of Cattle King Boogers Beach, and the outfit’s other talented animal athletes, led Dittmann Bucking Bulls to conclude the regular season atop the standings for the YETI PBR Australia Stock Contractor of the Year honor, 0.3049 points ahead of No. 2 Wallace Bucking Bulls. Other Dittmann Bucking Bulls’ standouts include Reloaded and Roid Rage, both of whom are also contending for Bull and Rookie Bull of the Year.

The top contenders for this year’s YETI PBR Australia Stock Contractor of the Year honor are: