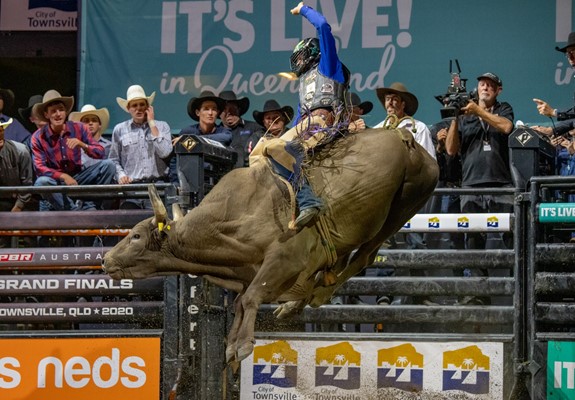 This weekend in Townsville, Queensland, there is more on the line than the title of 2021 PBR Australia Champion. After an intense season, on Nov.27, the league will also anoint the YETI Bull, Rookie Bull and Stock Contractor of the Year.

And in the races amongst the nation’s rankest bovine athletes, there is one bull that has emerged to be a cut above the rest – Cattle King Boogers Beach.

“That bull there, he always puts in 100%, he has never let me down,” stock contractor Jason Dittmann said. “He’s never had a bad trip, I can’t ask for anything more from that bull. He gets high in the air, you can’t get much better than that.”

Ahead of this weekend’s 2021 PBR Australia Monster Energy Tour Grand Finals, Boogers Beach not only is ranked No. 1 in the YETI PBR Australia Bull of the Year race, but he is also the top ranked animal athlete in the Rookie Bull standings. On both leaderboards, Boogers Beach leads Peter Wallace standout Razor Sharp by 0.5 points.

“Keep going, and Just keep doing what he’s doing. I can’t ask for any better of that bull,” Dittmann added of what it would take to clinch the year-end honors. “He’s fit, he’s healthy and he’s big.”

“And you know what, the best thing about that bull is he’s enjoying himself. They aren’t human, but you can just tell he’s fit looking, you know. I can’t ask for any more of that bull, he’s doing what I asked for. We’ll soon see at the end.”

The 2021 YETI PBR Australia Bull and Rookie Bull of the Year will be the animal athlete with the top average score when combining his Top 4 outs from the season and his last out at the 2021 PBR Australia Monster Energy Tour Grand Finals.

While all ABBI-registered bulls with four outs or more during the regular season can contend for the Bull of the Year honor, to be eligible for the Rookie Bull of the Year title, the animal athlete’s first season bucking at PBR competitions must have been no earlier than 2020.

Concluding the year with a 45.125-point average, Boogers Beach’s Top 4 outs from the year to date have all been for 45 points or more.

As the 2021 season got underway with a doubleheader in Rockhampton, Cattle King Boogers Beach was first marked 45 points for his 6-second buckoff of Macaulie Leather before posting an improved 45.5-point score for his swifter 2.49 seconds of work against Leather the next day.

Boogers Beach remained electric in his very next out as he returned to the arena in Townsville for the Touring Pro Division event held in tandem with the North Queensland Elite Junior Rodeo. Tying for the top bull honors with fellow Dittmann bovine athlete POA Fully Locked & Loaded, Boogers Beach was scored 45 points for his 3.66-second buckoff of Leather.

One of the rank bovines selected to buck at the landmark 2021 PBR Origin tournament, Cattle King Boogers Beach was again marked 45 points in mid-July at the second iteration of the team event in Cairns. Boogers Beach teamed with Lachlan Slade for a 90-point ride, marking the lone qualified ride aboard the bull this season.

“You don’t get much better than that,” Dittmann said as he reflected on the Cairns event being a season-highlight for Boogers Beach. “He bucked. Lachlan Slade the weekend before bucked off that bull, so to come back and ride him for 90 points when you got people like Troy Dunn and that judging, who have been around a long time, that’s pretty good going for a bucking bull I reckon.”

Throughout his standout season, Slade’s qualified ride atop Boogers Beach in July was the lone score logged abord the bull in his 10 trips on record. Further adding to the impressive nature of the ride, which is one of just two 90-point rides in Australia to date this season, the score was just the second ever aboard Boogers Beach. In 2020, Lachlan Richardson snapped the bull’s seven-out career buckoff streak when he rode him for 87.75 points during the Grand Finals.

Among the many high-profile contenders Boogers Beach has upset is none other than three-time and reigning PBR Australia Champion Aaron Kleier. Also the odds on favorite to win the 2021 title, Kleier has been bucked off three times by Boogers Beach, including earlier this season in Rockhampton when he was brought down in 3.57 seconds.

“Aaron Kleier, he’s a young kid, he’s got a good head on his shoulders, and he’s got a good family background behind him,” Dittmann said. “I would like to see those two head it off at the last round of the Finals, two champions going at it. I would reckon Townsville couldn’t ask for anything more than that at the Grand Finals.”

“He’s a young bull, and he’s unridden,” Dittmann said of Roid Rage. “This is his first year on the circuit. He’s had 10 trips, and I’ve never even seen someone actually warm that bull up.”

“Then you’ve got bulls like Reloaded, he’s just a good honest bull. They all put in their best effort, and there’s no bad trips in them bulls. They are bred well, they are fit, healthy, look good.”

As a result of his pen’s dominance in 2021, Dittmann is also the No. 1 ranked outfit in the battle to be the 2021 PBR Australia Stock Contractor of the Year and earn the accompanying $5,000 bonus.

The Stock Contractor of the Year will be the company with the top average score when combining his organization’s Top 4 average out scores from the regular season, with his average performance scores at the Grand Finals. Each event score is determined by the average of all the marks posted by the company’s bulls at a given event.

“What we’ve been going through with COVID, the PBR has done a great job to keep us contractors going, the riders going,” Dittmann said as he reflected on the year. “The sport itself, I know everyone is going through a rough staff, but I reckon the PBR has excelled. We’ve all kept going, and I can’t ask for anymore.”

After a year filled with its highs and lows, everything will come down to the 2021 PBR Australia Grand Finals in Townsville on Nov. 26-27. With the stakes higher than ever, Dittmann is excited to return to Townsville, which holds an unmatched energy.

“Out of all the PBR events I go to, even my family and friends, Townsville is the one everyone saves up for, everyone wants to go, everyone wants to be there. They love it. Not just because it is the Grand Finals, but because it is two nights. You meet your friends there, your family is there, and the atmosphere in Townsville is a bit different to all the other events that we go to. It’s got a bit more vibe about it.”

“Townsville is like Las Vegas,” Dittmann concluded. “It’s the heart of the PBR.”

Tickets for the 2021 PBR Australia Monster Energy Tour Grand Finals are on sale now and start at $35. They can be purchased at PBRAustralia.com.au.