Behind The Chutes – Troy Keliher 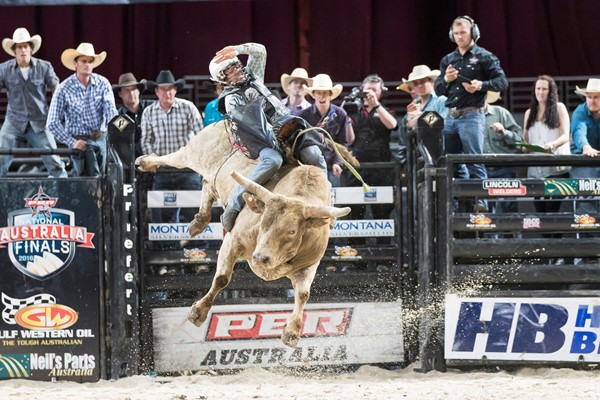 In the sport of bull riding, there are two athletes in every out – rider and bull.

With the league’s animal athletes holding such a crucial role in the sport, it is without question that the PBR’s devoted stock contractors are pivotal to bull riding’s continued growth.

Today we catch up with Troy Keliher whose established outfit has produced the likes of Hillbilly Deluxe and Mystery, leading the TK brand to be synonymous with champion-caliber blood lines.

Marking the first installment of Behind The Chutes, hear from the Keliher about some of his favorite moments, what he looks for when breeding the next generation of bucking superstars, and the importance of the ABBI to the further expansion of PBR Australia.

PBRAustralia.com.au: What sparked your interest in becoming a stock contractor, specifically for bucking bulls?

Troy Keliher: Bucking bulls was in my blood, my father was a contractor. Naturally it was what I loved. I loved it so much I just wanted to breed my own bulls. So, starting with a small herd of females over the years, and grew it to where we are today. It’s become a family love with my wife and children all part of it.

PBRA: You have many legendary bulls, can you tell us a little bit about Hillbilly Deluxe?

PBRA: Speaking of Mystery, can you tell us a little bit more about that impressive bovine athlete?

TK: Mystery is a direct son of Hillbilly Deluxe out of #022 Miss Mystery. He holds the highest scored bull at an Australian ABBI to date. This ABBI was run at Nanango, Queensland were Mystery had an outstanding trip. Mystery was sold at auction after the Inverell event earlier that year, he was purchased by Kevin and Nicole Kasper so watching Mystery perform like this for his new owners was delightful. Mystery is own owned and travelled by Scott Maynes and is still achieving high, winning the highest bull scores at PBR’s.

PBRA: You have won may titles with your bulls including the 2020 Heritage Champion, and 2019 Heritage and Reserve Champions. Is there a specific title that has meant the most to you all?

TK: Winning 2016 PBR Australia Bucking Bull of the Year with Hillbilly Deluxe was the ultimate. Knowing that we had bred, trained, and raised such an outstanding animal and to be awarded Bucking Bull of the Year meant the world to us as breeders. As breeders we take pride in our stock and select specific bulls to breed with. We get to know our stock, each animal has a different personality, they become family. So when our bulls win these titles, it’s an honour and reward for the time and effort that goes into preparing these rodeo athletes. Even when we sell bulls, we get the same feeling when they are winning.

PBRA: When breeding, what do you look for in both the dam and sire?

TK: Traditionally we paddock bred, but since the success of Hillbilly Deluxe we incorporate AI (artificial insemination) doing it all ourselves. Our females have over 20 years of breeding so each year we look for bulls that will complement our females. Breeding, confirmation, and bucking style is all taken into consideration. We may breed with multiple bulls in a season because different cows require different characteristics, i.e. kick or spin.

We have our likes and dislikes like everyone, but what we choose seems to work with what we’ve got. Some years don’t work out and that’s the gamble we take. We have a large AI program we run each season, selecting what we think are the right cows and matching them up with American bloodlines so the future is going to be very exciting for us.

PBRA: A few Australian contractors have started working with contractors in America. How does this fit into your breeding program, and how do you think this is improving the crop of Australian bucking bulls?

TK: This is very exciting for the future of bucking bulls in Australia. We have invested ourselves with the bloodlines of these contractors. As a breeder the ultimate dream would be to see a bull with your bloodlines buck in the USA. When we feel we have that special bull that’s a very exciting road to travel. We have connections with both Pages and Cord McCoy, so who knows what the future holds.

PBRA: ABBI is the chance for young bovine athletes to begin their competitive careers. What value do these events bring for stock contractors? And how do they help the nation continue to improve its quality caliber of bulls?

TK: The ABBI has been a blessing for breeders and contractors, and our industry. These events give us opportunities to train young bulls. From a young age they learn how to stand and travel in a truck, drink different water, get use to different backyard set ups, look for return gates, and how to leave the arena. All of these things are so helpful in the training of a bucking bull. When these bulls come through the ranks of the ABBI they are ready to rodeo - they stand in the chutes good, they leave the arena well, travel well.

The ABBI events are also a place to showcase your breed for those contractors that don’t breed and want to buy bulls trained and ready to rodeo. The introduction of the ABBI into Australia for breeders has been a game changer with the access to the U.S. bloodlines. The registration process is also a great way for breeders and buyers to see an animal’s bloodlines

PBRA: What is your most memorable moment from competing in ABBI events?

TK: Most memorable moment is a hard one, but 2019 ABBI Heritage Tamworth, winning Champion Bull and Reserve Champion Bull. We had four bulls we bred in the Top 15 of the heritage. That felt like a great achievement.

PBRA: Who are a few bulls you think will be the next stars from your pen? Tell us a bit about them?

TK: In the ABBI events #932 After Dark has been an outstanding bull from the start. He has plenty of kick. He’s by #617 Roid Rage, who’s a Hillbilly Deluxe son. #926 Paint Box, the 2020 Heritage Champion has shown he has what it takes, also sired #617 Roid Rage, and #915 Zeus is the current yearling leader for 2021. The potential these bulls are already showing and have shown from a young age is very exciting to see their futures. They have shown everything we ask for in a young bucking bull, that we have already put these bulls out to breed.

In the PBR this year, #617 Roid Rage, #627 Ranga, #636 Reloaded and #469 Comeback Kid, these bulls are all bulls we bred and now owned by Dittmann Bucking Bulls. Also, #506 Mystery now owned by Scott Maynes. All these bulls have had a lot of success coming up through the ranks of the ABBI events. Now watching them in the PBR and getting high point bull scores is so great to see. We would love to see another TK branded bull win Bucking Bull of the year. Who knows what the future holds.