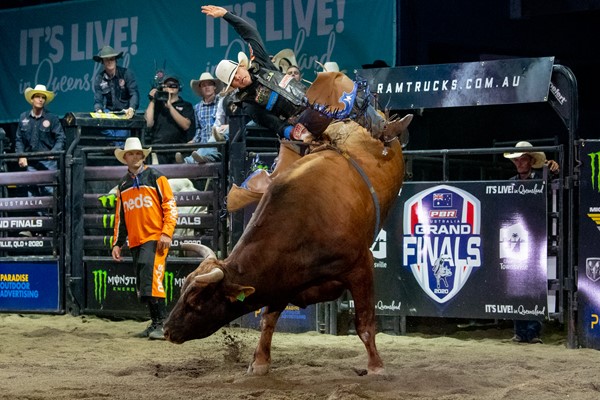 For more than 14 months, from August 2019 until November 2020, PBR World Finals qualifier Cody Heffernan found himself out of action, sidelined as he recovered from reconstructive knee surgery.

However, while the New South Wales native was inactive for more than a year, when he returned to competition for the final four regular-season Australian events of the 2020 season he appeared to have not missed a beat.

“My first event back of course was very exciting,” Heffernan said. “A little bit nervous of course, but I felt like when I got to the event, my natural kind of reaction just took over. I wasn’t thinking about my knee and worrying about that.”

The 31-year-old veteran returned to competition on November 7 for the Monster Energy Tour’s Toowoomba Invitational doubleheader. Going 1-for-2 in the opening event, Heffernan began his push for his third qualification to the PBR Australia Grand Finals on a high note, finishing third.

“I was able to ride that first bull, and win the round,” Heffernan said of his 82-point ride aboard Roger Rabit. “To get that first one done was bloody awesome.

“That first bull back was a big highlight, getting that one done. A huge weight off my shoulders.”

While Heffernan entered the championship round atop the event leaderboard, his hopes of victory came to a heartbreaking end when he bucked off Big Buck Hunter in a close 7.83 seconds.

“All in, that first event was great,” Heffernan added. “I took a lot of confidence out of that, being away for so long.”

Despite being shutout at the remaining regular-season tour stops, Heffernan’s bronze effort in Toowoomba was enough to secure himself a berth to the two-day 2021 PBR Australia Grand Finals in Townsville, Queensland.

Once at the season-culminating event, Heffernan went 1-for-5 to finish a career-best seventh, concluding the year No. 16 in the national standings. His lone qualified ride, an 85.5-point score on Double XL, notably earned him the Round 4 win.

“He was a really good bull,” Heffernan said. “Definitely a highlight to finish the National Finals inside the Top 10. All in all, those last few events were just to kind of get ready for the 2021 season. I knew I didn’t have a shot at winning the Australian title of course, I had only done five events, but the whole goal there was to just get on those better bulls, see where I was at there for 2021.

“I’ve done that and I was very happy with how I finished it.”

Looking forward, Heffernan is laser focused on one goal for 2021 – earning his second PBR Australia Championship.

“The main goal is to be the 2021 Australian Champion,” Heffernan said without hesitation. “I think that should be just about everybody’s goal. Other goals, I would like to qualify for the PBR World Finals by Australian events. Really just go to as many PBRs as I can and do as well as I can. Not just show up and go through the motions. I want to go there and win.”

Taking no break, Heffernan is already hard at work on actualizing those dreams, preparing for the 2021 season for whenever it should launch in Australia.

“Just been getting on practice bulls, and I’ve done a couple of rodeos,” Heffernan explained. “I’ve been working as well. Working, practicing, training, just trying to get ready for when they kick off again.”

And while the question for many is the status of his knee, Heffernan says it remains fine, and he’ll be raring to go once the season gets underway.

“All in all it’s fine now. She’s all fixed up. I’ll wear a brace now and I will wear it until the end of my career.”