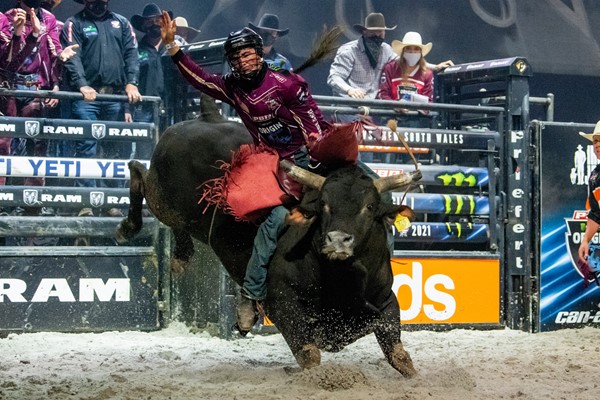 The 2021 PBR Origin tournament will continue July 17 in Cairns, Queensland.

RANK ACTION AWAITS IN CAIRNS  – This weekend, the 2021 PBR Origin tournament will hold the second event of the three-part series on July 17, as Cairns, Queensland, hosts PBR Origin II at the Cairns Convention Centre. Last weekend, Brisbane held the opening event for the state-vs.-state tournament, as Team Queensland narrowly held off a hard-charging Team New South Wales by one ride to surge to an early lead. The three-part series of events was initially scheduled to begin July 3, in Newcastle, New South Wales. However, the event was postponed until October 23 due to COVID-19 (coronavirus). The 2021 PBR Origin marks the second iteration of the state-vs.-state bull riding showdown, modeled after the State of Origin rugby league event that is considered Australian sports’ greatest rivalry. Action for PBR Origin II – Cairns gets underway at 7:30 p.m. AEST, and fans will be able to catch all the action LIVE on RidePass, at RidePass.com or via the mobile app.

THIS WEEKEND’S FORMAT – The 2021 PBR Australia Origin II – Cairns will feature three rounds of competition. After each of the 10 competing bull riders for both teams attempt one bull each in Round 1 and Round 2, the Top 4 riders from each team will advance to the bonus round for one final out. The event winner will be the team with the highest combined score in the event aggregate. In addition to vying for the title of PBR Australia Origin Champion and their share of the event purse, riders will also be competing for points towards the Australian national standings and broader PBR world standings. All points will be awarded for each rider’s efforts in Round 1, Round 2 and the event aggregate. No points will be awarded for the bonus round.

ROSTER ALERT: TEAM NEW SOUTH WALES – Ahead of PBR Origin II – Cairns, a roster change has been made for Team New South Wales. Isaac Leclair of Woolbrook, New South Wales will replace Chris Wilson. Twenty-year-old Leclair made his PBR debut in 2020 and covered his first ever draw, marked 72.5 points aboard Hell Yeah to finish ninth at the February Touring Pro Division event in Marrabel. In the months since, Leclair has remained active at PBR Australia events, including competing at the two early-season events held in May in Rockhampton. His selection to Team New South Wales marks the young gun’s first-ever appearance for the Blues at the PBR Origin tournament.

LET’S RECAP: 2021 PBR ORIGIN I – BRISBANE – On July 10, the 2021 PBR Origin tournament launched in exhilarating fashion, as Team New South Wales and Team Queensland went head-to-head in the first of three events that will determine which state is the supreme bull riding powerhouse. Going a combined 8-for-24 to collect 680.5 points, Team Queensland outlasted a hard-charging Team New South Wales by one ride and 88 points to win the opening installment of the three-part 2021 PBR Origin tournament.

In Round 1, despite a back-and-forth battle, Team Queensland surged to an early lead, never relinquishing the top spot to enter Round 2 with an 87.5-point lead on Team New South Wales. Captain Aaron Kleier was the first to strike for the Maroons, covering Cliffhanger for 85 points as the first rider to leave the chutes for Team Queensland. After a three-out buckoff streak, the Queensland contingent earned its second score when Lawson Nobbs went the distance aboard Broken Halo for 84.5 points. Lane Mellers continued the momentum, converting on Crackalackin for 86 points as the next rider to leave the chutes for Team Queensland. World Finals qualifier Kurt Shephard was the final rider to put points on the board for the Maroons, riding Breaking Bad for 83 points.

In Round 2, however, Team New South Wales bounced back in resounding fashion, overtaking Team Queensland by 84 points ahead of the bonus round. While Captain Kleier once again converted for Team Queensland, covering Roam Aviation High Risk for 84.5 points to give the Maroons their second momentous start to a round, first-time Team New South Wales competitor Trefor Sproule ensured the celebration was short lived. Matched up against Ariat’s Flaunt It, the 31-year-old reached the whistle for 82 points to keep the Blues within 90 points of the defending Origin Champion Maroons. The 8-second effort was the first of three rides recorded by Team New South Wales that Team Queensland failed to answer. Continuing Sproule’s success, 2016 PBR Australia Champion Cody Heffernan brought Team New South Wales within a mere three points of its rival when he rode Gangatino for 87 points, while Lachlan Slade gave the Blues their first lead of the tournament when he covered Random Assault for 85.5 points. Following the trio of qualified rides, Team New South Wales led Team Queensland by 82.5 points. Rookie of the Year contender Macaulie Leather then briefly returned Queensland to the top of the leaderboard, snapping the team’s backwards slide when he rode Big Buck Hunter for 85.5 points. Seven-time PBR World Finals qualifier Lachlan Richardson, however, was fast to answer for Team New South Wales. Covering Freckles Brown for the third time in as many attempts, this go marked a round-best 87 points, Richardson gave the Blues an 84-point lead ahead of the bonus round.

In the final outs of PBR Origin I – Brisbane, the action intensified. Shephard, Leather, Mellers and Captain Kleier were tapped to ride one final time for Team Queensland, while Joseph Down, Heffernan, Richardson and Slade earned the chance to compete one final time inside Brisbane Entertainment Centre for Team New South Wales. As the first man to leave the chutes, Shephard propelled Team Queensland back to the top of the event leaderboard when he covered Ambush for 86.5 points. Mellers then extended the state’s lead to 88 points when he rode POA Fully Locked & Loaded for 85.5 points. The event then came down to the final two riders – Queensland Captain Kleier and New South Wales sensation Slade, both of whom went 2-for-2 in the opening rounds. In uncharacteristic fashion, Kleier bucked off Razor Sharp in a swift 1.49 seconds, leaving the door open for Slade to cover his draw, Cattle King Boogers Beach, and lead Team New South Wales to victory. Slade, however, proved no match for the fierce bovine athlete as he was sent to the ground in 3.38 seconds.

SLADE WINS INDIVIDUAL RACE IN BRISBANE – In addition to vying for state pride, the competing riders at the 2021 PBR Origin tournament are also contending for crucial national points in the race for the 2021 PBR Australia Championship. In the individual battle at PBR Origin I – Brisbane, Team New South Wales’ Lachlan Slade was the top-performing individual rider, tallying 172 points to earn 72.5 national points. In Round 1, Slade rode Reloaded for 86.5 points before converting aboard Random Assault in Round 2 for 85.5 points. While Slade began the tournament stop No. 11 in the nation, he is now No. 5 and within 114 points of No. 1 Aaron Kleier as he seeks his first PBR Australia Championship. Team Queensland Captain Kleier finished second in the individual race, also going 2-for-3, to net 53 national points. He earned his 8-second efforts aboard Cliffhanger for 85 points and Roam Aviation High Risk for 84.5 points. The runner-up effort allowed Kleier to further his stronghold on the No. 1 ranking, extending his lead from 19.5 to 60 points over No. 2 Leather.

Team New South Wales standouts Lachlan Richardson and Cody Heffernan tied for third courtesy of their matching 87-point scores, each colleting 38.5 national points. Richardson, who rode Freckles Brown, climbed from No. 5 to No. 4 in the national standings, while Heffernan, who made the 8 on Gangatino, surged from No. 13 to No. 10. Rounding out the Top 5 in the individual race was Queensland’s Lane Mellers. He rode Crackalackin for 86 to finish fifth. Mellers netted 22 national points, elevating him one position in the race for the 2021 PBR Australia Championship, now No. 7 and within 141.5 points of No. 1 Kleier.

TEAM QUEENSLAND – Here is how each rider for the Team Queensland Maroons performed at PBR Origin I – Brisbane:

TEAM NEW SOUTH WALES – Here is how each rider for the Team New South Wales Blues performed at PBR Origin I – Brisbane:

FAMILIAR WATERS – Round 1 of PBR Origin II – Cairns will feature just one rematch. For the second time in his career, seven-time PBR World Finals qualifier and Team New South Wales rider Lachlan Richardson will climb aboard Bang Ya Drum. The duo of athletes first met in Beaudesert, Queensland in 2020, with Bang Ya Drum getting the better of Richardson, sending him to the dirt in a quick 2.47 seconds to earn a 42-point bull score.

As PBR Origin II – Cairns continues with Round 2, four riders will face familiar foes, all of whom are competing for Team New South Wales. Marking his second rematch of the state-vs.-state showdown, Richardson will attempt to remain perfect against The D.O.C. The two teamed up in 2020 at the Ballarat Stampede with Richardson reaching the requisite 8 for 89.5 points en route to the event victory. Sam Woodall will attempt a bull he has previously covered in a rubber match. After Woodall bucked off Chemical Weapon at the Tamworth Iron Cowboy in a close 6.1 seconds, he covered the bovine athlete in their most recent meeting, marked 81 points at PBR Origin I – Brisbane. Lachlan Slade, winner of the individual aggregate at PBR Origin I – Brisbane, will look to even the score against High Class Hooker. Renewing a rivalry from the 2018 season, Slade bucked off the bull in Rockhampton, Queensland, in a quick 2.9 seconds.

The remaining Round 2 rematch is:

PAST CAIRNS EVENT WINNERS – While this weekend’s event will mark the first-ever PBR Origin event in Cairns, the city is no stranger to world-class bull riding competition. Historically, PBR Australia has held six events in Cairns, visiting the Queensland city annually from 2014-19. When PBR last travelled to Cairns in 2019, Team Queensland Captain Kleier went a near-perfect 2-for-3 to claim the event win. The victory was one of five for the now-23-year-old that season en route to his second consecutive PBR Australia Championship. Seven-time PBR World Finals qualifier Lachlan Richardson won the league’s debut event in Cairns in 2014. Still a dominant contender amongst the PBR ranks, Richardson was locked in a feverish battle alongside Kleier last season for the national championship before an injury on the final day of the season put a heartbreaking end to his quest for the 2020 PBR Australia Championship.

SHANE “MADDOG” SIMPSON RETURNS TO THE ARENA – While renowned Australian protection athlete Shane “Maddog” Simpson hung up his cleats in 2013, he astounded fans earlier this season when he made his triumphant return to the arena. After feeling nostalgia for his old role while in attendance at the 2020 PBR Australia Grand Finals in Townsville last November, Simpson began to put in the needed work to reprise his role in the PBR Australia protection team. He first returned to the arena in mid-June at the third Monster Energy Tour event of the year in Rockhampton and will next don the jersey this weekend for PBR Origin II – Cairns in his home state of Queensland. In addition to earning nine Australian titles and multiple freestyle honors, Simpson was selected to work the PBR World Finals in 2008 alongside Joe Baumgartner, Frank Newsom and Shorty Gorham.

NEXT UP – The 2021 PBR Australia season will continue July 31 in Rockhampton, Queensland at the Great Western Hotel. Action for the Monster Energy Tour’s Rockhampton Invitational will get underway at 7:00 p.m. AEST.