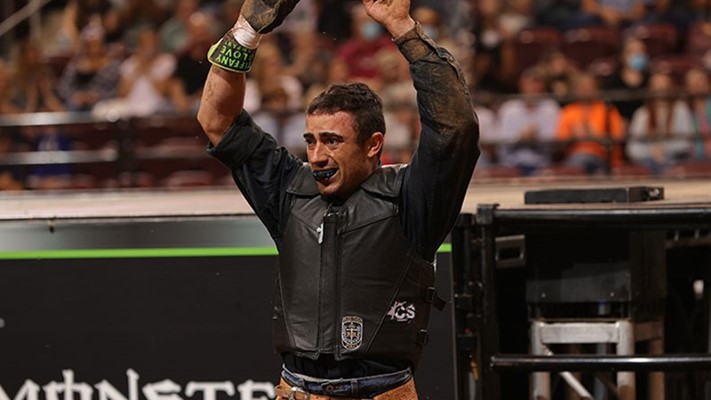 COLORADO SPRINGS, Colo. – We love watching riders win their first premier series events, and it was Rafael Henrique dos Santos’s turn to hit that milestone this weekend. Plus, third time was the charm for Boudreaux Campbell and Woopaa, Chase Dougherty continued to assert himself in the Rookie of the Year race and a few riders got roughed up. Miss a moment of the action this weekend? Here’s what happened around the PBR.

As the lone rider to go 3-for-3 at the PBR Bad Boy Mowers Mowdown in Little Rock, Arkansas, Rafael Henrique dos Santos picked up the first premier series win of his career and improved to No. 9 in the world standings.

Boudreaux Campbell also notched a career-first victory, winning his first 15/15 Bucking Battle when he teamed with Woopaa for the third time for 93.75 points. The 5-year-old bovine was marked 46 points and continues to hold the top spot in the YETI World Champion Bull standings with a 46.59-point average.

Juuuuust in case you haven’t noticed, Woopaa is currently in the midst of the best season for a bull since three-time World Champion Bull Bushwacker earned his second title in 2013.

Claudio Montanha Jr. also had a big weekend in Little Rock, as he won Round 1 on the back of his first 90-point ride since April of 2018.

The Rookie of the Year race is currently in the hands of Chase Dougherty, who extended his lead on No. 2 rookie Colten Fritzlan to 71 points after a third-place finish in Round 1.

On the injury front, Keyshawn Whitehorse managed to triumph with a sprained right MCL, possible broken foot and head laceration, while Dalton Kasel, Ezekiel Mitchell and Derek Kolbaba also found themselves under the care of the sports medicine team.

Eli Vastbinder and Amadeu Campos Silva tied for the Round 1 victory in Springfield, Massachusetts…

…but it was Conner Halverson clinching his second Pendleton Whisky Velocity Tour victory of the season with the high-marked ride of the event.

Check out the best photos from day one and day two in Little Rock.

An update from Stetson Lawrence:

Loving these vibes for our Monday.

The Pendleton Whisky Velocity Tour next heads to Grand Rapids, Michigan, for the Grand Rapids Classic on Aug. 21 (RidePass on Pluto TV on Aug. 21 at 7 p.m. ET).