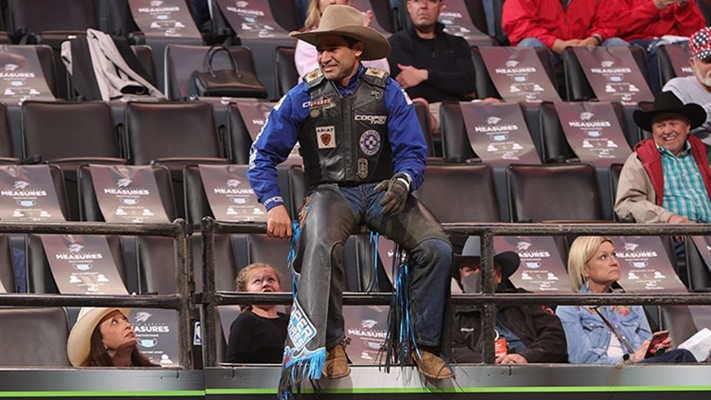 Joao Ricardo Vieira earned his first Unleash The Beast victory of 2021 in Oklahoma City, rising from No. 4 to No. 2 in the world. Photo: Andy Watson/Bull Stock Media.

COLORADO SPRINGS, Colo. – Joao Ricardo had everything going for him this season except an event victory – until this weekend. Plus, Kaique Pacheco is looking like his 2018 World Champion self, the Rookie of the Year race intensified, and the site of the first major sports cancellation in 2020 finally welcomed fans back again. Miss a moment of the action this weekend? Here’s what happened around the PBR.

Could Joao Ricardo Vieira become the oldest World Champion in PBR history? Early returns look promising! The 36-year-old went 3-for-3 in Oklahoma City to notch his first event win of the 2021 season and surge to No. 2 in the world standings.

Vieira has ridden his last nine consecutive bulls, which includes the Round 1 victory in OKC.

World No. 1 Kaique Pacheco was also in the winner’s circle this weekend, as the Ice Man delivered in the 15/15 Bucking Battle. Pacheco rode Chiseled for a career-best 94 points and league lead-tying sixth career Bucking Battle win.

It wasn’t just the veterans showing up and showing out in Oklahoma City, as Chase Dougherty rode Detroit Lean for 91.25 points to put himself squarely into the Rookie of the Year conversation.

It’s been a rough start to the season for two-time World Champion Jess Lockwood, though, as he suffered another injury in Round 1.

Kyler Oliver was also bitten by the injury bug and will undergo shoulder surgery, missing the next six months of action.

On March 11, 2020, the NBA game between the Oklahoma City Thunder and the Utah Jazz at Chesapeake Energy Arena was postponed due to concerns surrounding the COVID-19 pandemic. More than 13 months later, that very same arena opened its doors to host the PBR and a 45% capacity crowd.

Hunter Kelly won Round 1 of the Grand Forks Chute Out…

…but Austin Richardson went 3-for-3 to take the first Velocity Tour win of his career.

Check out the best photos from day one and day two in Oklahoma City.

Not a bad way to stay busy!

When the Teels open a zoo, we’ll be first in line for tickets.

The Pendleton Whisky Velocity Tour rolls into Wichita, Kansas, for the Wichita Invitational on April 23-24 (RidePass on April 23 at 9 p.m. ET and April 24 at 8 p.m. ET).