Another Aussie mixing it with the World’s Best 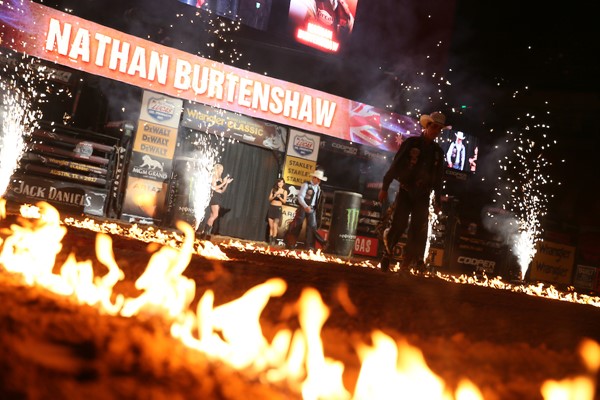 Nathan Burtenshaw is out to conquer. Photo: Bull Stock Media.

Going into Austin, Burtenshaw was ranked 44 in the world and got in as an alternate.  Round 1 nerves got the better of him but the next night it  was a different story – He top scored with an impressive 87.5 points on South Texas Gangster to win the round and finish fifth overall, he had everyone asking “Who is that guy?”

"It was a pretty nice little bull,” Burtenshaw said, “He just was out and around to the right. I just got him done. It is a big relief. I was pretty nervous before that and that was probably what cost me, being so nervous. It is good to get the first one down and I tried to block it all out and it worked.

Following Austin – he has now jumped up to the 35 in the world rankings.  The quietly spoken 23 year old is just taking it one bull at a time he knows all too well it can all change in an instant.

In 2016 Nathan headed to the States to follow his childhood dream – Make it to the PBR World Finals in Las Vegas and one day win a world title.  It all started off according to plan – placing at a number of PBR Touring Pro division events, he was starting to settle in.  Then 23 April it all changed at an event in Winston Salem NC. He was thrown hard from a bull that resulted in him breaking a veterbrae in his back.  He then spent months on the sidelines recovering before making a return to competition in October - it took a while to get back his timing and into the swing of things.

2017 he headed back to the USA, came home in June to compete and went on to win the PBR Australia National Finals in July in Sydney.  The decision to head back to the States three weeks ago has paid dividends, he picked up $7480 US, but more importantly it is one step closer to achieving a set goal.

This weekend Burtenshaw, Wilkinson and Richardson will be flying to Uniondale, New York to do it all again.  Unfortunately Shepard will be flying home to heal up from an elbow injury.  For all our Australian fans, these guys along with Sonny Schafferius (Dysart QLD) who is just on the brink of getting back on the BFTS tour, will be home to compete at Townsville’s Iron Cowboy 17th & 18th November alongside a host of internationals and the top ranked Australians.

Tickets on sale now so get in early to avoid missing out - head to PBRAUSTRALIA.COM.AU to purchase tickets and keep up to date with all the latest PBR news and standings.